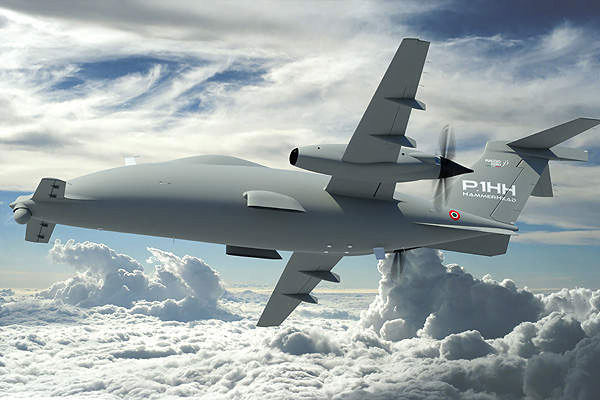 The European Space Agency (ESA) and the European Defence Agency (EDA) have funded two consecutive projects called DeSIRE, in 2013, and DeSIRE II (Demonstration of Satellites enabling the Insertion of RPAS in Europe), in 2015, to examine how drones might operate within controlled airspace when controlled by satellites for commercial and governmental applications. To undertake this project the consultancy and technology multinational Indra (Spain) led the first phase DeSIRE with a European industrial consortium formed by AT-One (Germany and the Netherlands), SES ASTRA (Luxembourg), Thales Alenia Space (Italy and France) and CIRA (Italy).

The purpose of the project was to check whether a RPAS (Remotely Piloted Aircraft System) or drone can safely share the sky with a conventional aircraft using the transmission of its command and control communications and communications between air traffic control (ATC) and the pilot on the ground via a satellite in geostationary orbit.

The benefits of satellite communications for Beyond Line of Sight (BLOS) control and data transmission and reception was that the drone was able to send, in real-time, high-quality data to the ground control station to aid maritime surveillance. This was a necessity to show that what the military have been doing for several decades could be applied equally well to civilian operations.

The drone completed a 6-hour flight in civil and military airspace, sending to the ground, via the satellite data link, the signals from its on-board sensors. The RPA climbed to 20,000 ft (6,096m), entering airspace class C, managed by AENA, the Spanish Air Navigation Service Provider (ANSP), from Barcelona Control Centre. The pilot of the RPA followed all the instructions issued by the AENA air traffic controllers, acting like any other civil or military aircraft. During this flight test, a manned Air Force aircraft approached, simulating frontal and 90º collision trajectories. The pilots of both aircraft followed the separation instructions issued by air traffic controllers, demonstrating the safe operation of remotely piloted aircraft in an emergency situation.

DeSIRE II, the second element of the ESA EDA RPAS project was aimed at developing and demonstrating services based on a remotely piloted aircraft (RPA) flying in beyond radio line of sight (BRLOS) and was completed in November 2018. From a regulatory perspective, the project had a key objective to demonstrate that the satcom link, allowed safe BRLOS Operations, potentially allowing RPAS operations in civil traffic airspace. In particular the aim provided the first set of required link performance (RLP) parameters for the RPAS C2 link (including ATC relay) following the guidelines provided by the Joint Authorities for Rulemaking of Unmanned Systems (JARUS), in BRLOS conditions via a dual satcom link. The project objectives were undertaken using a Piaggio Aerospace P.1HH RPAS, complemented by simulation and emulation activities.

The DeSIRE projects were supported by 26 members of the EU, excluding UK and Denmark. The UK along with the USA, Russia, China have extensive experience in flying military drones using satellite communication. Despite the challenges characterising satellite-controlled RPA systems (especially for civilian purposes), research and industrial communities are still investigating the feasibility of the introduction of RPAs into non-segregated airspace.

The benefits of drones and satellite communication are fairly transparent and many while the difficulties and costs are less clear. They fall, broadly, into four categories: signal degradation, signal latency (how long it takes to tell the drone what to do), availability and human perception.

For a ground station to communicate with a drone via satellite, the signal has to leave the station travel 40,000km to the satellite which deals with the signal and then routes it down 40,000 km to the drone. Wireless communications are corrupted by nature along the way. These corruptions include noise (general background electromagnetic signal that is added to the signal sent), Rayleigh fading (this is weakening of the signal by scattering as the signal passes through the stratosphere and ionosphere and hits and deflects from particles), Rician fading (when the signal partly cancels itself as parts of the signal spread as they leave the transmitter and arrive at the receiver on the satellite at slightly different times causing mismatch), the Doppler Effect (when the signal frequency changes slightly depending on the relative distance of source and receiver, and rain attenuation (the absorption of a microwave radio frequency signal by atmospheric rain, snow, or ice. Losses occur mostly between frequencies 11 GHz and 30 GHz). The drone has to act upon the signal and tell the ground station what it’s done. At light speed, the time is very short but it does exist. The time lapse is in the order of milliseconds which isn’t much unless you are travelling at 200 metres per second (720 kpm or 450 mph) at 20,000ft or so.

There are four common communication architectures for UAS. These are direct link, satellite, cellular, and mesh networking. Satellite-based may be the most promising solutions. The use of satellites can provide a better coverage than the use of the direct links, so that the UAS remains well connected. The typical limited bandwidth in satellite links does not really pose here an issue, because C2 protocols should not require large amount of available bandwidth. On the other hand, if user data were to be delivered, larger bandwidth may be required to meet the requirements of high data rate applications. Geostationary Orbit (GEO) and Low Earth Orbit (LEO) satellites can be employed; if considered, a large delay should be taken into account in the former case, while temporary disconnections are expected in the latter case.

Typical latency (how long it takes from sending the message to the UAS receiving it) is in the order of 0.25 to 0.6 seconds for GEO satellites. That’s probably acceptable for UAS  in non-civilian segregated airspace but not suitable for UAS’s operating below 200 ft.

We tend to imagine drone delivery, for example, as buzzing down the boulevards of Bognor or soaring through the streets of London  but much of the world has not configured their street furniture to allow drone access as the pictures from Delhi and Ho Chi Min City. A second’s delay in control on these roads would be a disaster.

LEO (100km to 1,500km height) satellites have a much-diminished latency of the order of 0.005 seconds. At the moment, GEO satellites and LEO satellite-constellations are owned and operated by different companies that see themselves in competition. Should one company have access to both and be able to set up a Wide-Area-Network (WAN) that UAS and ground stations could hook into, then many problems would become a thing of the past and freight drones could be easily integrated into existing air traffic management systems.

Availability measures the proportion of the year for which the communication link is operational.  High availability is expensive but worthwhile for safety, as even one second of interruption can be dangerous during remote control. To minimise the probability of an outage, parallel redundant systems are required. Triple redundancy with a voting system is commonly using in aviation.

Most satellite services are intended for passengers’ personal electronic devices’ connectivity rather than video streaming from a UAS platform, so care was taken when identifying the Forward Link and Reverse Link data rates. Global Xpress has global GEO coverage, only 99.9% availability, so it should be combined with another service. It operates at Ka-band frequencies (26 – 40 GHz).

The Iridium NEXT service has a high data rate of 1.5 Mbps forward link and 512 kbps return link. It uses LEO satellites to reduce the latency.

Is the general public ready for automated planes without pilots on-board? It boils down to politics and economics.

While the technology promises to revolutionise air travel and freight, it will cost pilots jobs. Given that many prognoses suggest that 800,000 pilots will be needed over the next two decades, that may not be such a burden. However, the shut-down of international travel during the Covid-19 crisis has taught us not to take anything for granted. It may well be that passenger airplanes may take longer to convert to the absence of pilots but freight lines such as Fedex Express, Emirates SkyCargo, UPS Airlines and Cathay Pacific Cargo might just embrace the concepts. The airline industry employs tens of thousands of pilots worldwide and they tend to be very vocal and political when they are unhappy. We can see the problem when we think of the railways, particularly in the UK and France, struggle to streamline their on-board staff. Trains run on rails and don’t really need drivers, let alone guards. We can only imagine the kerfuffle if on-board staff on airplanes are reduced or removed.

Economically, remotely-piloted or even AI-controlled (Smart) planes make perfect sense. The insurance industry needs data but, given that, by far, the greatest cause of airplane mishaps can be traced back to human error, it follows that premiums should fall. Insurance companies don’t like falling premiums so it is certain that the risks of errant code (as was the case of the Boeing 737 Max) or hacking will be brought to bear until sufficient data either negates or proves the concern. Removing pilots worldwide would save an incredible amount of money. Swiss bank UBS estimates that removing humans from the commercial cockpit could produce savings upwards of $35bn (£28bn) annually. That figure would boost profits in an industry that has often struggled to make money. For more information on Valour Consultancy’s latest report on the Commercial UAS platform study, click here.

Sign up to Our FREE Newsletter
You'll receive updates on our research and regular insights on the impact of the current COVID-19 pandemic
No Thanks!