UTM in the Wilds 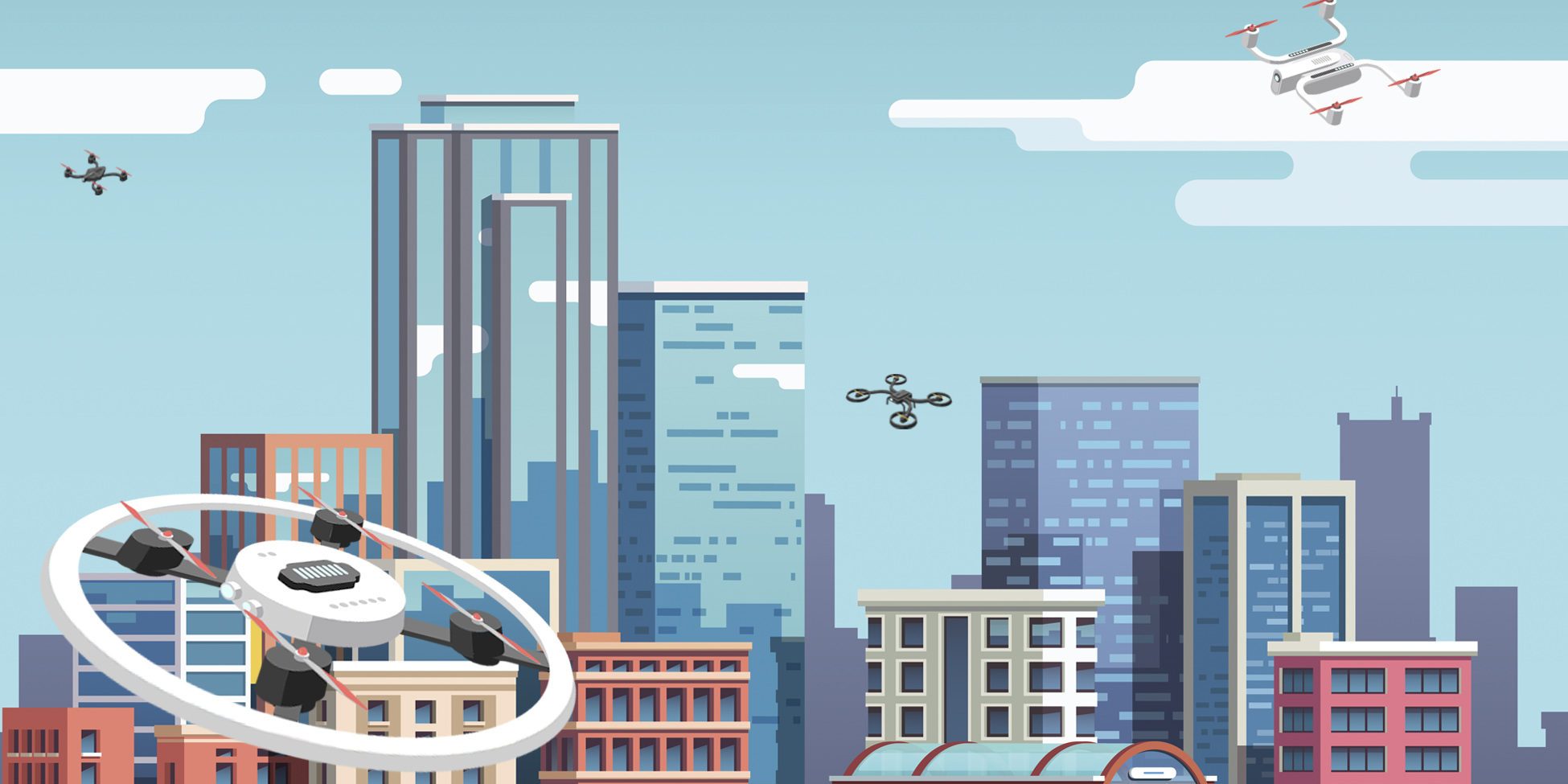 “I don’t see how he can ever finish, if he doesn’t begin.”

Alice thought to herself that unmanned traffic management should be easy, so she checked several countries that are beginning and this is what she found. In the Asia/Pacific region, there is practical experimentation but a willingness to standardise, Russia is ploughing its own furrow and Europe has developed a series of modular trials to have a co-ordinated commercialised traffic management system. The UK has also instituted a similar research group, Catapult Connected Places (CPC). The concept of integrated traffic management and logistics has yet to be addressed for U-space (U-space is that volume of the atmosphere that would normally accommodate urban drones, say, up to 200m above ground level (AGL).

The opportunities for Unmanned Traffic Management (UTM) systems is that all the systems so far produced are created by private companies. This implies that the system has to be commercially viable, it has to make some profit. It also requires common standards and communication protocols. Such standards and protocols are gradually emerging from bodies such as ASTM, ANSI, STANAG (NATO Standard) and IEEE. Autonomous shipping faces the same problem.

For drones, clearly, passenger ticket tax, which pays the majority of the budget for conventional air traffic management, is not applicable. A simple fee for every flight, while obvious, has the knock-on effect that to make more money, more flights are needed, and the situation becomes another clogged system and the incentive to improve the system is diminished. An annual subscription or fee per miles flown or some combination of them all might be desirable. On the plus side, UTM systems lend themselves to automation so that there needs to be few humans employed. An ideal system might be an AI controlled system with integrated machine learning that allows only drones that can log on and have a credit account associated with them, and thus pay their fee, to take off. However, in the hands of a private company, such a system is open to abuse (as is one controlled by any government but that is a separate issue).

Many of the differences between conventional Air Traffic Management (ATM) and U-space have to do with scale. Drone traffic will be far denser than passenger jet traffic. Drone information services need to be signiﬁcantly more detailed, diverse and dynamic than those used by aircraft today. Safety critical information will be needed at a much higher ﬁdelity and speed than today’s ATM, and will include geospatial information services to ensure surface clearance, local weather information to calculate drone trajectory uncertainties and non-conventional navigation sources (such as signals of opportunity and vision-based navigation) to allow for more precise navigation on a local scale. Some of this can be delegated to on-board AI. Services of this level of ﬁdelity require the movement and provision of massive amounts of data to a wide array of users spread out over a large geographical area and, perhaps await complete 5G coverage.

In Korea, PRODRONE has a commercialised UTM system collaborating with LG U+, a South Korean cellular carrier capitalising on its 99.5 per cent 4G coverage. The 5G penetration of 9.67 per cent, represents the highest penetration rate in the world and this is expected to cover the entire country by 2028. The “U+ Smart Drone UTM System,” enables a drone to fly safely for disaster monitoring and logistic transport in BVLOS (beyond visual line of sight). They have demonstrated an autonomous drone taking off in a remote location, carrying out duties and returning to a control centre on its own. The system confirms the drone’s position and elevation through the UTM system in BVLOS. Drone operators in a control room can control drones everywhere over land in the country, wherever the network is connected. It makes possible multi-person monitoring and creating a flight plan for multiple drones, useful in many applications.

In Japan, which has a long history of drone deployment for agriculture, a UTM system allowing many drone operators to share data, such as critical flight variables was tested in October 2019. The system, developed by Japan’s New Energy and Industrial Technology Development Organisation (NEDO) and others, trialled 100 flights per square kilometre for an hour and were completed at the Fukushima Robot Test Field, about 20km north of the Daiichi Nuclear Power Plant. The drones had flight control devices fitted to report their position and speed to the UTM system. Security of the network was achieved with firewalls and intrusion detection systems (IDS). Authentication keys were allotted to drone operators permitting only approved operators to connect. Flight plan management and flight conditions assumed multiple simultaneous drone-use scenarios such as multiple drone weather observation, and multi-drone formation flights for delivery. Amongst others, Sky Perfect conducted flight tests in BVLOS mode as in disaster damaged areas where, perhaps, ground communication is not available. Position and flight condition data from the drones and control via communication satellites from the direct flight control function in real time was achieved. Hitachi with the Japan Information and Communications Research Institute developed a location sharing device with multi-hop communications that enables long-distance BVLOS flight of multiple drones. It was demonstrated that systems equipped with collision-avoidance technologies can interconnect with the drone traffic management system. The aim was to integrate the UAS traffic management system with collision avoidance technology. JAXA developed a UTM simulator and connected a part of the simulator to the drone traffic management system verifying deconfliction of drone traffic to avoid mid-air collisions.

Russia has opted for fitting drones with transponders and the use of low-level radar. Digital radio systems (CRTS) and the Aviation Institute for Navigation Instrumentation (Navigator) have developed a system of avionics and digital ground-based equipment for radar detection of light aircraft and drones for the management and monitoring of air traffic at lower level airspace. The systems comprise small-scale air surveillance system, airborne small-sized transmission system, aircraft responder, ground proximity warning system, airborne collision warning system, navigation and landing systems and ground stations. It allows the creation of objective situational awareness for air traffic using the principle of everyone-sees-everyone. It is difficult to see how such a system without a high degree of automation might cope with extensive commercial drone use.

In the USA, a UAS Traffic Management Pilot was initiated as a research project by NASA, and then between the FAA and NASA. The Unmanned Aircraft Systems Traffic Management System is intended to be distinct, but complementary to, the traditional FAA’s air traffic management system. The September 2019 pilot project was to develop and demonstrate a traffic management system to safely integrate drone flights within the nation’s airspace system, also creating a shared information network and gathering data. Using mature commercial technologies for UTM including flight planning, communications, aircraft separation and weather services for these drones operating under 400 feet AGL, there will be a cooperative interaction between drone operators and the FAA to determine and communicate real-time airspace status. The FAA will provide real-time constraints to the UAS operators, who are responsible for managing their operations safely within these constraints without receiving positive air traffic control services from the FAA.

The primary means of communication and coordination between the FAA, drone operators, and other stakeholders is through a distributed network of highly automated systems via application programming interfaces (API), and not between pilots and air traffic controllers via voice. The FAA UAS Data Exchange umbrella supports multiple partnerships, the first of which is the Low Altitude Authorization and Notification Capability (LAANC). Essentially the paperwork has been automated and the traffic management has been delegated to approved UTM vendors such as Aeronyde, AirMap, Airspacelink, AiRXOS, Altitude Angel, Kittyhawk, Skyward, Thales Group and UASidekick.

In Europe (not including UK which is conducting its own parallel projects), under the auspices of the Single European Sky (SES), there has been a co-ordinated series of projects to investigate building a roadmap for the safe integration of drones into all classes of airspace. This outlined the steps needed to ensure a coordinated implementation enabling RPAS to ﬂy alongside commercial aircraft. Beginning 2017, a set of exploratory research projects was undertaken to address everything from the concept of operations for drones, critical communications, surveillance and tracking, and information management to aircraft systems, ground-based technologies, cyber-resilience and geo-fencing.

In 2018, practical demonstration projects to showcase U-space services managing a broad range of drone operations and related applications, and their interaction with manned aviation was launched. Those ranged from parcel deliveries between two dense urban locations, medical emergencies and police interventions, as well as air taxi trials in an airport-controlled airspace. Leisure use was also catered for, with projects demonstrating how private drone operators can beneﬁt from U-space services. The operations also aimed to demonstrate different levels of automation that are possible, as well as seamless information exchange between multiple service providers in the same geographical area at the same time. In total 186 flight missions for 19 projects were made involving 19 countries. Together, they represent comprehensive preparatory work for commercial drone activities. 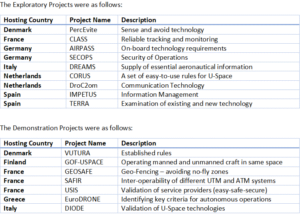 There a multitude of various countries, bodies and companies trialling different UTM technologies. As in all things, several leaders will emerge and gradually coalesce into a common standard. NASA is moving things clearly in the US and in Europe, the SES has developed a comprehensive system. The Brussels effect (or Creeping Standardisation) is the process of unilateral regulatory globalisation caused by the European Union de facto (but not necessarily de jure) externalising its laws outside its borders through market mechanisms. Companies adopt the rules as the price of participating in the huge EU market, and then impose them across their global businesses to minimise the cost of running separate compliance regimes. Similarly, the USA sets its standards. Air Traffic Management has been able to embrace both requirements through a process of joint comparison embraced by the FAA and Eurocontrol. This is likely to dictate the host of well-known multinational companies that will jump on-board with the protocols, procedures and systems. The international market for UTM will undoubtedly become a very hot topic in the post-Covid-19 world. For more information on the commercial UAS and UTM markets, contact us at Valour Consultancy.