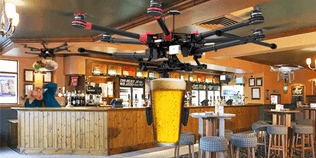 Much is made about delivery by drone for Google and Amazon but, of course, the real money to be made is from replacing delivery by the postman, the pizza guy, the lunch counter jockey, even the coffee barista and all the other poor folk who tramp the streets and restaurant floors attempting to satiate the desires of a demanding public. Can you imagine the unbridled rapture that will greet the first drone service to deliver gin and tonic to your garden deck chair on a gloriously sunny July afternoon?

What are the precursors required to achieve such a ‘heaven-on-earth’? For pizza and beer, we need night flights and for post and lunch deliveries, we need to have ‘first person view’ allowed. Indeed, it makes little sense to have drone deliveries if each drone requires its own operator. Operators need to be able to supervise three, four or even five drones simultaneously to make the cost savings significant enough to encourage the investment. The first flight to any address must be supervised but once the route is mapped, a certain amount of leeway can be allowed.

What is required for the delivery?

At the moment, UAV regulation is in the hands of the various agencies (FAA in the US, CAA in UK, EASA in Europe, TCCA in Canada, CASA in Australia etc.) Their brief, almost universally, is to ensure the safety of air passengers and the airworthiness of vehicles flying above their countries. Where they have made rules concerning UAVs, it has been to ensure they don’t endanger real aeroplanes and helicopters and they don’t breach people’s privacy or interfere with the work of ‘the authorities’ or ‘the government’.

A major issue to be addressed is “how will these DUAV flights interface with traditional air traffic control?” In the UK there are somewhere between a million and one and a half million flights a year. If the drone delivery service is allowed to flourish, then there will be (say) about a half million flights per day – in London – between 7pm and 11 pm and that’s a low estimate. For cities like Seoul and Beijing that number is likely to be exceeded by factors of ten or twenty. In Mumbai, the famous dabbawallas deliver half a million lunchboxes every day between 11am and 1 pm and then collect them for return and mistakes are so rare they better six sigma criteria easily.

The benefits of replacing this manpower with drones are incalculable both to the environment (reduction in pollution and traffic congestion) and to society (reduction in the number of young men, preponderantly, who are hurt or killed delivering cheap food within a specified time-frame. For example, pizza delivery in the US is listed as the fifth most dangerous American occupation and, in Seoul, Korea, 28% of all traffic fatalities and injuries involve food delivery personnel (invariably young men under 25).

It is clear that no system that requires human approval for each flight will assist in a many drone scenario. It will have to be a self-regulating system such as functions on our road networks. There are several systems that will allow autonomous DUAV flights and provide some overview.

We might think that the Global Positioning System (GPS) can do the job; it works on your mobile phone and in the car for your directions and many delivery companies use GPS to control their fleets of delivery vans. For large vehicles, in human hands, it works fine but for autonomous DUAVs, not so well.

The signals come from satellites parked 10,600 miles above the planet and lots can happen in those miles (Solar Storms, Volcanic Clouds etc.) so GPS reliability is actually only around 95% for signals received. The alternative error is receiving a signal that is wrong. Here the reliability is very much higher but when it does go wrong, the results would be catastrophic to a small drone in a big world. The US Defence Department has 24 satellites spaced around the planet (they didn’t put them there for you and me but they let us use the signals) but, even these scientific miracles go out of date whenever Raytheon or Honeywell develop some more accurate or a faster gizmo for this application.

In January 2016, as an old satellite was being replaced, GPS timing was found to be off by 13 microseconds – admittedly not much – or 13,000 nanoseconds (one nanosecond is a billionth of a second and equates to about one foot of inaccuracy in positioning) which means that, should a drone be depending on GPS for directions, it might have been 4 km out of position – not good for the person waiting for their ham and mushroom pizza.

Luckily all is not lost as there are several other systems available for guiding DUAVs.

The Russians have an equivalent to the US GPS called GLONASS (Global Navigation Satellite System) and have enabled it for public use. The Chinese have a system called BeiDou-2 (the name derives from the constellation The Big Dipper), soon to be renamed COMPASS and the Europeans have the Galileo network, neither of which will be ready until 2020.

Modern smartphones use signals from both independent systems to verify their position greatly increasing their accuracy. They also use cell-tower masts for triangulation. A group of companies in the US including PrecisionHawk, Verizon, Harris and DigitalGlobe have developed a system called LATAS (Low Atitude Traffic and AirSpace Safety) using the Verizon cellular network, the Harris ADS-B network and Digital Globe’s Geospatial Big Data Platform.

Another alternative is high flying dirigible UAVs. These float at the bottom end of the stratosphere and in a similar way to satellites but at a much lower level and much less disturbed by atmospheric phenomena. Originally intended for military surveillance, these would be ideal vehicles from which to base densely populated drone management. One forecast from the USA suggested that by 2018, there would be around 75,000 drones operating in that country. If drone delivery flourishes, that figure might be an underestimation by a factor of one hundred. The drawback with these stratospheric communication stations is that their digital fingerprint is much less than high flying satellites so instead of the 24 used by the GPS system, virtually every city would need one.

That fact tells us how they might be financed. While not the same cost as satellites, these are expensive, but within the budget of a city project. They would carry relays for HD TV and 4G cell phones as well as drone communication facilities and the city could then rent out this facility to mobile phone networks, drone operators and TV operators. An additional benefit being the removal of unsightly mobile phone masts. There are already several manufacturers of such dirigibles including AeroVironment, Thales, AeroStar, Lockheed Martin, SkyTower, Avanced Technologies Group. China has tested one as have Japan, South Korea, Russia, Israel, India and the EU (two of which have sadly been referred to as the HairShip and HairCraft).

NASA has proposed a system which they call Unmanned Traffic Management (UTM, a rather over-used acronym) which promises airspace management and geo-fencing (a fancy term for ‘don’t go near airports or government buildings or military installations and don’t fly above 500ft’), weather and severe wind and rain warnings, congestion management, natural and man-made obstruction database, safe separation and ‘allow’ only authenticated flights. This can either be localised or persistent (in the sense that is nation-wide 24/7). It has been tested for a few flights in a small rural area but is not expected to be ready for congested urban areas until 2019 at least. Both this system and that proposed in a paper from the University of California, Berkeley and a similar system under discussion in Australia depend to a great extent on ground-based towers and cameras to recognise each UAV, one system going so far as to suggest each UAV carry a ‘numberplate’. Admittedly, they include satellite back-up.

Nature uses Earth’s magnetic field and star positions to guide migrating birds and even certain bacteria are able to detect the earth’s magnetic field so it won’t be long before quantum-sized magnetic difference detectors are available for mounting in UAV circuit boards. Unfortunately, this may be useful for north-south journeys and inter-town deliveries but will not help the pizza DUAVs in down-town San Francisco.

Another alternative is to teach UAVs to think like humans. Human’s read maps and spot landmarks to get where they want to. That takes quite a bit of computing power and a fair bit of memory but it is not beyond the bounds of possibility that, one day soon, this is exactly how drones could navigate in urban areas. The technique of “Deep Learning” used in artificial intelligence is a leading example of this front. Of course, humans get lost as well so, like dynamically-positioned ships, there would be probably need to be a few systems running simultaneously and the direction chosen on a voting system between the systems.

Of course, the technology astute person or film buff’s favourite is bound to be ‘Skynet’ – the internet of things. If everything with a printed circuit board could talk to each other, then no drone need ever get lost, it could ask a local lamppost the way, it could ask your freezer if you’re home and your lawnmower could direct a gin and tonic to be delivered to your garden chair. The Terminator approves this idea.

A company called Matternet in California has famously been undertaking automated UAV deliveries of infant blood samples in Malawi for HIV diagnosis, in the Dominican Republic for deliveries of medical specimens for analysis. It has tested deliveries in Bhutan, New Guinea and Haiti and is developing a system of package delivery for the Swiss Post Office. It has tested its systems using specially installed beacons including landing platforms with automated battery changes along the way. It’s not pizza or gin and tonic but it’s a start.