The Business of Drone Development 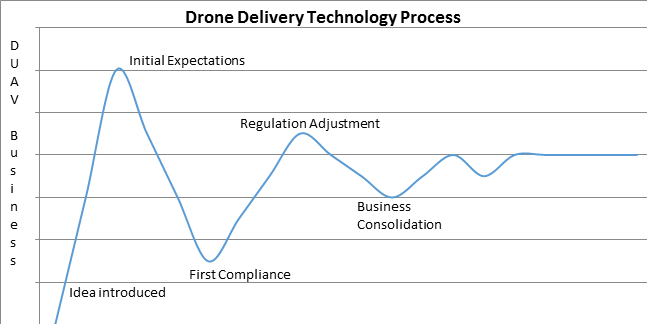 There are various scenarios that might show the development of the ‘drone industry’. One used is from the Gartner Hype Cycle and it describes the idealised start-up and adoption of a new technology. It ignores international effects of differing adoption rates, competition and, when the market is saturated and new technologies arise, the inevitable drop-off.

A new technology has fantastic potential but not all that glistens is golden. Quite frequently what is possible is not viable and, even if viable will never reap the profits promised. Anyone with a mathematical background looking at the Gartner Hype Cycle will come to the conclusion that the graph looks remarkably familiar. The figure below is a very poor representation of how it might apply to the drone delivery business.

It looks familiar to engineers because it replicates an under-damped second-order response to a step impulse, the idea of which has been around since at least the 18th century. This is a perfectly acceptable approximation of what happens in many systems such as traffic behaviour on a motorway, initial demand for the latest iPhone and, if we can identify the components of the development of UAV services, then this will be an approximation of this industry too. It should be stated that responses can be under-damped, over-damped and critically damped (when things work out perfectly). It may be that happenstance gives us a critically damped response to the development of UAV services but the overwhelming likelihood is that it won’t.

Real life has the equivalence of resistance, capacitance and inductance which modify the response to any system. As we look at the drone industry development, we should be mindful of the things that will speed up adoption including, perhaps, an overabundance of drone start-ups (the induction), holes in the service to society it might fill (the capacitance) and the resistance to its adoption which might dampen the take-up (legislation and competition with entrenched suppliers of services).

The UAV services industry does not exist in isolation so we have to be careful to observe that step changes elsewhere in other industries and in technological advancements and economic depressions can irrevocably promote or destroy drone use so we use the caveat of ‘all other things being equal’ knowing full-well that they aren’t. For those already under the delusion that drones can only do the job drones can do, remember somebody somewhere is dreaming of Star Trek style replicators, matter transmitters, self-reporting plants and, for the military, long-range death rays.

What is the purpose of this analogy? How can it be used by UAV Service Companies, Investors, Industrial Analysts and Regulators? Will it help us forecast the future market and the demand for drones and their services? Valour Consultancy is very interested in forecasting the market for Drones and their services and competes in a market where such forecasts are rife.

There are literally tens, if not hundreds, of forecasts in the media and they all agree that the market will grow phenomenally – partly because you can’t sell market reports by forecasting zero or negative growth and mostly because the proliferation of opportunities on the horizon bedazzle the brain. In reality, whether the forecast is $82 billion in the USA by 2025 or $12 billion by 2021 or $5.6 billion by 2020, it will be wrong. The techniques used for forecasting are various and the act of forecasting sometimes changes the forecast – a good forecast will encourage investment, leading to an oversupply; a poor forecast will dry up investment leading to a shortage.

Here is a quick round-up of the techniques used and their inherent problems.

Add to these techniques, Cross-Matrix Impact Analysis, where the forecaster tries to guess which developments elsewhere will have an impact on the forecast and Scenario-building in which various scenarios are examined for their impact and a complete combined forecast has the potential for greater accuracy but, equally, because there are so many factors involved any which could be in error, there is some risk of the forecast being unworldly.

With all this said, it is still useful to examine the influences of business development as outline in the second-order response.

The easiest component of the system to examine is resistance and, in this regard, legislation has the greatest effect. In the US, for example, the regulatory body is a government department with the stated mission of providing “the safest, most efficient aerospace system in the world.” It has recently published a 624-page document detailing how the commercial drone industry might operate. This is a typical governmental paper outlining what the limitations for operation are and ensuring the UAVs do not compete with established businesses except in niche markets. This will have a big dampening effect if not addressed. Other countries, however, do not take quite the same approach and when the bankers and investors in those countries start to make sufficient money, pressure will be applied to the FAA to update its regulations.

In the UK, the Civilian Aviation Authority is an independent public corporation tasked with the same job as the FAA but phrased in a slightly different fashion. In Canada, Transport Canada is a governmental department concerned with all transport but regulates UAS with a proverbially light touch but still precludes FPV commercial flight. Countries around the world are all members of the International Civil Aviation Organisation (except Tuvalu, Dominica and the Cook Islands – Liechtenstein has asked Switzerland to represent it) and the consensus is that UAVs are airplanes in airspace but without on-board pilots so they must follow the same rules.

At the moment amongst regulators, there is high resistance to First Person View (FPV) which is needed to allow delivery drones. Make no mistake, despite the claims for Precision Agriculture, Geo-positioning Services or Low-Altitude Radio Retransmission, delivery by drone will be the big money earner. It is simple to assess this by estimating the equivalence of the millions of man-hours replaced, congestion cleared and thousands of tons of CO2 unreleased. There are solutions to this problem but the political will has to back the solutions. Political will is found in the pockets of party donors. Once the big retail chains, Google and Amazon set the sights on the problem, it is very likely the regulatory climate may change.

What about the inductance, the number of UAV service start-ups and their flexibility in supplying market needs? This could be estimated by the amount of investment over the last few years. This has been following an almost exponential curve since early 2012 for investments notified to the stock market in the US. Private investment for smaller enterprises must equal or exceed that internationally. Anecdotally, from researching Valour Consultancy’s report, it can be noted that new UAV service companies are added to our international database on a weekly basis. So we know that there is an inductance in a model of drone business development.

Capacitance or drone potential seems limitless at this stage of business development. There are forecasts for most sectors of the commercial business – agriculture, surveying and inspection, entertainment, search and rescue, health and safety, delivery and sport and by geographical region (although most of these are suspect given that the market forecast companies are firmly rooted in the west). So we know we have a capacitance factor in our model.

If our simulation is good, we now have to put figures to it to make it useful. We have the last five years results for the US and Europe and for the major UAV producers so that might help. The second-order response has been studied intensively by mathematicians and engineers for nigh on 200 years so there are some good formulae for estimating time response and peak value so we should get a good idea of where we might end up. Unfortunately, at this point we run into our caveat “all other things being equal”. This is too naive to accept. We know things are going to change and are changing on a daily basis. Valour Consultancy’s report puts this in perspective and produces a range of forecasts reflecting this.

Everyone in the UAV business is looking forward to what is possible; what can be achieved with this technological marvel; how much mankind will benefit by reduction in pollution, congestion and cost; benefit in increase of agricultural production, site safety, building maintenance and, yes, human happiness. Valour Consultancy would like to let you peek through the door at what might be, if we get it right and, even if we don’t, we’re still going to have a helluva ride.