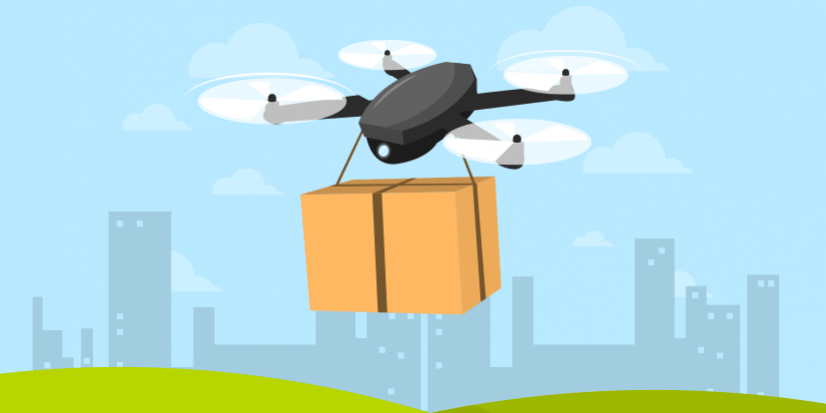 With most of the cities around Europe, North America and Latin America deserted and the majority of populations locked away in their homes, the start of 2020 has not been best. The service markets, such as restaurants, gyms, co-working spaces, have come to a grinding halt and many businesses and industries will be damaged for years to come. The tax hikes after this pandemic will be eye watering. Nevertheless, with every negative, there will be positives. Delivery drones have been on the horizon for a while now, but their arrival will now almost certainly be accelerated.

Supermarket sales soared in March and companies like Walmart, Carrefour, Tesco, Sainsburys and many more will have surpassed all their past Christmas sales records but there have been additional costs that weigh heavily against potential profits. Home exercise equipment manufacturers have been inundated with unexpected demands for stationary cycle bikes, treadmills and rowing machines. Consumer entertainment content platforms will be tallying up new subscriptions like someone seeing their winning lottery ticket balls slotting in, unless your platform relies on live sports. In today’s environment, I think I could create a global sport phenomenon in camel racing.

One of those positives will be a huge increase in home delivery, Tesco has added an additional 145,000 weekly home delivery slots, enabling it to make 805,000 deliveries each week, or 20% more than before. With social distancing and people staying in their homes for periods for unimaginable periods of time, drone deliveries make unparalleled sense

Irish drone company, Manna Aero, is to trial delivery services in Moneygall, a small village halfway between Dublin and Limerick in Eire in the second week of April 2020. Currently, the service is focusing on medicine delivery to vulnerable people locked in their homes. However, this could expand to food if successful.

Zipline, a US company renown for its work in Rwanda and Ghana, is applying with the FAA to launch its own medicine delivery service in the USA and UK. Also in the US, Matternet has teamed up with UPS for medicine deliveries in North Carolina, and with SwissPost, in Switzerland, for deliveries of lab supplies. Chinese internet conglomerate JD.com’s first delivery was to a village near Baiyang Lake in Hebei Province in the north of the country in February. In China, hotels were using robots to deliver food to rooms, although this is not an unmanned aerial system.

Alphabet’s Wing delivery drone service has reportedly performed more than 1,000 deliveries in Australia and the US in the last two weeks. Wing drone service opened up for service in late 2019, working with Walgreens, FedEx and Super Magnolia (a local Virginia grocery store chain). The new service, in Christiansburg, Virginia, has allowed customers to purchase roughly 100 different products, over the counter medications or pre-built packages. The FAA approved Alphabet’s drone delivery program in March 2019, and the company announced its plans for ‘store to door’ delivery of more than 100 products in Virginia six months later. The delivery drones are claimed to have the ability to fly up to 120 km/h (almost 75 mph).

The delivery drone service which was rolled out in Christiansburg, Virginia, which is actually within a short distance from Wing’s testing zone – it has been testing drone delivery as part of the U.S. Department of Transportation’s Integration Pilot Program since 2016. For Wing, approval of its U.S. operations marks one of several major steps throughout 2019 that included a green light from Australia regulators who allowed public deliveries from the company in 2019 too. Its speed of acceptance has outpaced that of Google’s main competitor in the commercial drone space, Amazon, whose service, Prime Air, plans to deliver the company’s products straight to consumers’ doorsteps.

From a logistics industry’s perspective, drones represent one cusp of revolutionary change that will forever alter the way on-line goods are delivered. For food and small package delivery over the ‘last mile’, it can make little or no sense to send a ton of metal and a human to steer it. Replacing delivery drivers and couriers with lightweight energy-efficient UAVs, environmentally friendly, is accepted as the solution. In addition, there is no human to human contact.

It is believed there are at least 34 countries running or testing drone delivery services, either for medical, postal, food including pizza and coffee. In addition to those already mentioned, these include Australia, India, Singapore, South Korea, Thailand and Vuanatu in the Asia-Pacific region.

In Europe, Belgium, Denmark, Estonia, Finland, France, Germany (pizza), Iceland and Ireland have all tested or initiated drone deliveries. In the UK in December 2018, Vodafone tested drone deliveries in Portland Bill using their 4G mobile network rather than a radio transmitter and Amazon Prime has made a minimum of two trials of long-range drone operations near Cambridge and, in 2018, a fully piloted flight in East Sussex over a seven-mile route at about 400ft.

Also, German UAV company, Wingcopter is collaborating with UPS Flight Forward to develop a next-generation delivery drone solution for packages. UPS announced the launch of UPSFF in 2019, after getting FAA approval, Part 135 certification in September 2019, paving the way for the delivery service to fly further into the consumer market. UPS has since partnered with drone delivery company Matternet to ferry medical samples via drone at WakeMed hospital in Raleigh, N.C. Wingcopter and UPSFF will next seek regulatory certification for a Wingcopter unmanned aircraft to make commercial delivery flights in the United States.

Drone deliveries will never be a fit all solution but in circumstances such as today, drone deliveries make a lot of sense. In our latest commercial UAS platform report, we estimate nearly 3,000 systems were actively being used globally for drone deliveries. This figure will skyrocket in 2020 and 2021 beyond our highest predictions. We estimated the drone delivery service market was estimated about $2.3 million last year. By the end of 2020, this number of likely to be around $20 million as we see much greater deployment of systems, more start-up companies and also more partnerships and collaborations. For more information on our latest report, please contact us here.