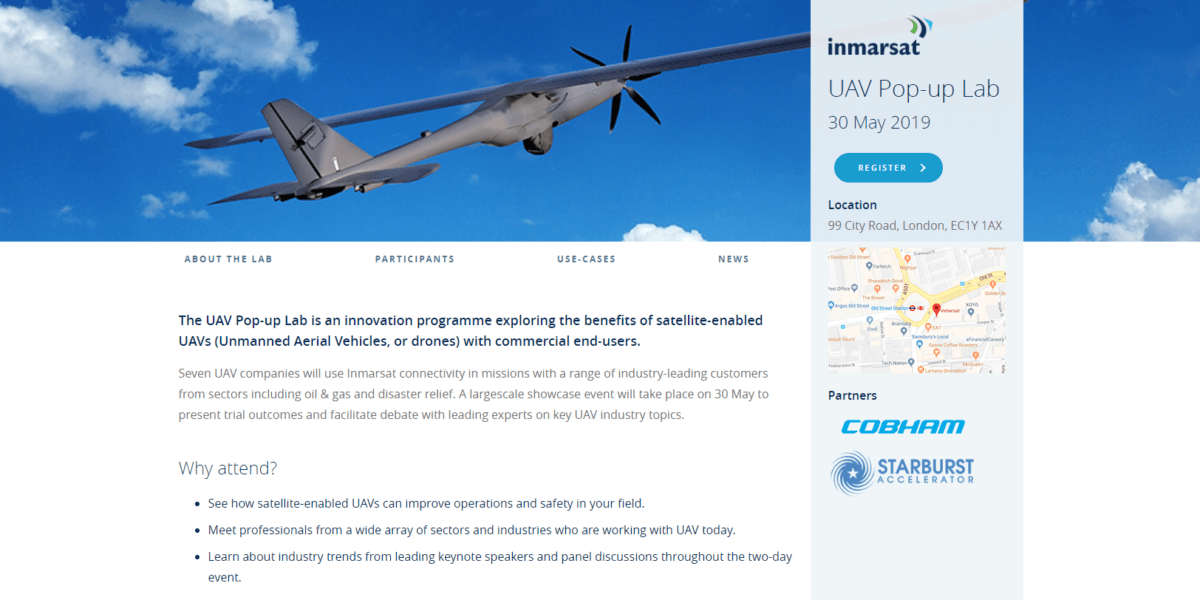 On Thursday 30th of May 2019, we attended an Inmarsat Pop-Up UAV Lab at the firm’s Old Street headquarters.

Rupert Pearce, CEO of Inmarsat, provided an introduction to the changing dynamics and use cases for aerial unmanned aerial vehicles (UAV) and noted down several significant developments of the technology. One remarkable example is Zipline’s deployment and delivery of medicines, vaccines and blood to hospital facilities in Rwanda and other African nations.

The light 1.45kg terminal capable of delivering background data services up to 200 Kbps of data, with a 1.35 seconds latency, via Inmarsat’s BGAN coverage. Its streaming class services can deliver up to 180kbps with half HDR.

Inmarsat invited several UAS entities to provide some insights into their trials and uses of the Aviator UAV 200.

These companies are listed below:

Before these companies presented and participated in the panel sessions, Inmarsat’s senior UAS management program provided an introduction to its new agile management approach and developing a culture of teams workings within teams rather than its traditional siloed workings. For example, its maritime staff working on maritime projects only, aviation on aviation, government on government and so forth.

Mike Holdsworth and Andrew Legg provided some insight into how Inmarsat plans to develop specialist leaders to target certain areas for UAV solution.

The presentation then delved into how the Aviator UAV 200 compared to competing IoT trends, comparing an Iridium IoT terminal which weighed 30 grams, which was capable of 0.3 kbps and had a terminal latency of 22 seconds. The Aviator also performed better than Iridium’s 9522B and Aircell Axxess terminal solutions too.

The value chain is dominated by three player types:

The only company noted in the value chain who is strategically attempting to cover all areas is DJI, the largest Chinese UAV OEM with its renown Phantom and to a lesser extent, Inspire, brand UAVs.

Presently, the key inhibitors for UAVs are its expensive price points compared to satellite, limited yearly flight capacity (100 and 200 hours per year), limited battery technology which is prone to quickly degenerating, and restrictive regulations by aviation bodies in certain countries.

However, one of its key drivers is its enhanced capabilities for certain professions, such as monitoring pipelines.

Based in Norway, the firm developed UAV inspection capabilities for critical infrastructure assets, such as powerlines and/or search and rescue (SAR). The potential use of Inmarsat’s satcom systems will enable Robot Aviation to reduce mission planning, increase its UAV coverage area and also provide a more robust solution.

The implementation and practical usage of the UAV is still in its early stages and as such Robot Aviation have not yet completed any missions to date.

Robot Aviation are also developing and producing small to medium sized fixed wing UAVs for other commercial and military use. No further information was provided on the latter point.

With the introduction of Inmarsat’s satcom capabilities it will enable Robot Aviation to save time on mission planning, however, the savings on operational costs are unclear as no missions have been trialled.

It is also believed safety for the end-user will be increased and there will be less operational risk for those undertaking the SAR missions.

Based in New Mexico, USA.

The firm offers a class 2 small UAS which utilises solar electric for long endurance flights. Solar panels are located on the aircraft’s wings and top body enabling the system to fly for up to 8 hours, in optimal conditions. Relying solely on battery, the UAS’s flight time is limited to 4 hours.

They have been working to get the FAA’s 107 waiver. This allows them to fly UAVs BVLOS and at greater than 400 feet (133 metres) altitude. The FAA have been willing to grant such waivers for firefighting, search and rescue, incident awareness and analysis and utility and other critical infrastructure restoration.

Formed in 2013, the firm has 40 employees spread across Turkey and Ireland.

Its UAS system is an endurance drone, with flight times around 6 hours, and the use of a satcom systems allows it to be really maximise upon BVLOS applications such as pipeline inspections. Inmarsat and Cobham’s systems offers several advantages, one of which is the ability to fly close to the line and also transmit data from the UAS to headquarters live.

From A-techSyn’s perspective, its UAS solution is much more cost effective than using a helicopter, faster to deploy than a helicopter, safer than manned aircraft and thus increases safety for pipeline personnel. It can also use a fleet solution therefore deploying multiple UAVs over a pipeline route, and in effect, monitoring sections of a pipeline 16 hours a day, a flight operation every two hours. The firm has quoted BOTAS (Turkish state-owned company responsible for the country’s oil and gas pipelines) for a 3-year contract.

Founded in 2014, the company sells and operates its UAV helicopter products. Indonesia and Israel are its main markets, addressing agriculture inspection and border control surveillance verticals.

Last year, the firm launched an Advanced Engineering service, and will launch a ResponseDrone, AlphaSecurityandDefense.com and new Alpha 900 models in 2019.

One of the key benefits for Alpha’s drones using the Aviator 200 UAV is the reliability of the connection. Radio Line-of-Sight is not always possible for the circumstances its clients require the drone to be used in.

The Alpha 800 is gasoline powered and has a range of 50km via radio. Its autonomous flight range is 3 hours and has a payload of 3kg. The firm has accumulated more than 3,000 hours of flight time.

With only a limited payload capacity of 3kg, the Aviation UAV 200 takes up half the platform’s weight capabilities. Nevertheless, future models will have greater payload carrying capacities, states Alpha.

Furthermore, satcom pricing will always be more expensive than direct radio link and service operators will likely use satcom as a back-up solution where radio is not possible.

One possibility is businesses moving to a leasing model, and potentially satcom costs could be incorporated into that leasing model.