Seat-back In-Flight Entertainment is NOT Dying! 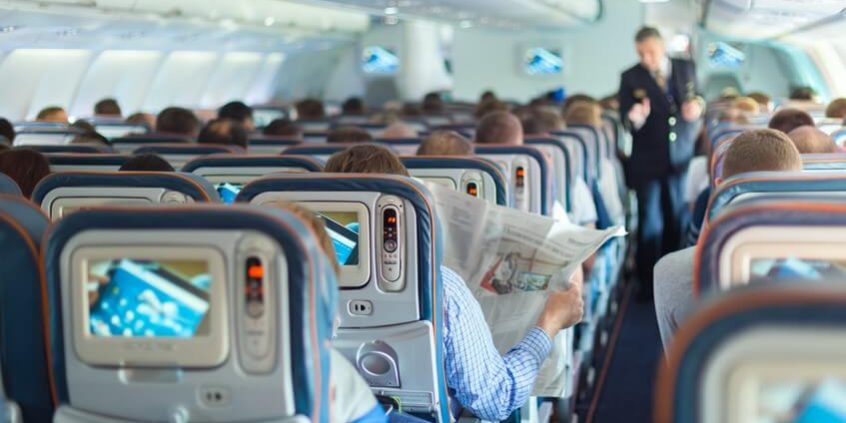 It might not be a date that immediately evokes strong memories but cast your mind back, if you will, to January 25th, 2017. Donald Trump was just getting his feet under the White House desk after a shock election victory two months’ prior, Roger Federer was rolling back the years on his way to capturing a remarkable 18th grand slam at the Australian Open and, lest we forget, news outlets the world over were united in sounding the death knell for the humble seat-back in-flight entertainment (IFE) system.

And what prompted such proclamations I hear you ask? American Airlines revealed that it would be eschewing embedded IFE on new Boeing 737 MAX aircraft in favour of wireless distribution of content to passengers’ own devices. Yes, the decision by one carrier not to offer the traditional seat-back IFE on one single aircraft type sent the media into a frenzy and resulted in headlines like these:

“The death of in-flight entertainment? American Airlines scraps screens and tells fliers to bring their own” – The Telegraph

“American Airlines does away with seat-back entertainment” – The Economist

I could certainly understand the hullaballoo if American had come to such a decision for say, the 22 A350s it currently has on order, but that fact that it chose not to fit embedded IFE on some narrow-body aircraft is hardly revolutionary. Indeed, an estimated 45% of these aircraft roll off production lines without any form of IFE on board, and around one-third of the installed base still, somewhat surprisingly, carries drop-down screens (overhead IFE). It is therefore disingenuous in the extreme to imply that the adoption of wireless IFE (W-IFE) on aircraft that often don’t carry any form of IFE whatsoever is somehow tantamount to the imminent extinction of an entire class of product.

Today, nearly every single wide-body aircraft is delivered with a seat-back system and it would be much more revealing to look at whether W-IFE is making inroads into this market to establish whether a fundamental shift is taking place. The answer is that W-IFE is making inroads, but not at the expense of embedded IFE. In fact, many carriers are installing both W-IFE alongside seat-back screens on their long-haul aircraft. One reason for this is the emergence of second screening where people commonly use their personal electronic devices (PEDs) while watching another screen – a trend most prevalent amongst millennials who are accounting for an increasingly larger percentage of travellers.

Interestingly, it is Philippine Airlines (PAL), which might provide a clue as to how the industry may shake out in the not-too-distant future. Back in 2014, the carrier drew widespread criticism and mixed reviews for choosing to jettison embedded IFE on much of its long-haul fleet. Instead, PAL fitted its A330s and A340s with SITAONAIR’s ONAIR Play W-IFE offering and was heralded as the “poster boy” for the new class of streaming systems making their way to market. Fast forward to January 23rd, 2017 – a mere two days before American Airlines made shockwaves – and PAL quietly announced the return of embedded Audio/Video On-Demand (AVOD) systems on its A330s. The reader should note that its A340s are in the process of being phased out, while ONAIR Play will still be offered on the A330s, as well as on the carrier’s short-haul aircraft.

The bottom line is that when it comes to the death of embedded IFE, we’ve heard it all before. The re-birth of IFC following the demise of Connexion by Boeing in the mid-2000s was supposed to usher in a new era of in-cabin entertainment whereby passengers could stream to their hearts’ content. While the likes of JetBlue Airways, Aeromexico and QANTAS have, in recent years, struck deals with Amazon Prime (in the case of the former) and Netflix (in the case of the latter two) that allow passengers to do just this using new high-speed connectivity pipes, all continue to maintain the latest seat-back screens.

The key reason W-IFE will not cannibalise a significant chunk of the classic IFE market in the next ten years is down to the fact that almost every single wide-body is ordered with an embedded system way in advance of actual delivery. Furthermore, major Gulf carriers have indicated that they fully intend to offer seat-back screens well into the future. Emirates, for example, will install seat-back IFE on the 150 Boeing 777X aircraft that will start to enter its fleet in 2020. As long as these luxury brands continue to offer embedded systems, other flag carriers will be compelled to do likewise in order to be seen as on the cutting edge of in-cabin technology.

Another roadblock that W-IFE vendors seeking to smash into the wide-body market need to surmount is the restriction on the streaming of early window content (EWC) to passenger PEDs. Though some vendors are keen to underplay the value of EWC, passengers have come to expect that they will be able to watch the latest Hollywood blockbusters on medium- and long-haul flights. To put this into perspective, Rodrigo Llaguno, Customer Experience Corporate Vice President at Aeromexico recently revealed that the airline had expected a higher take-up of passengers watching Netflix and was surprised when data revealed that people were actually watching more EWC. Regardless of the availability of EWC, there is an extremely long way to go before IFC technology can support streaming of web-based content to multiple seats on multiple aircraft and at a price that is palatable to passengers.

Relying on the bring your own device (BYOD) model has several other pitfalls. One is the assumption that passengers will bring onboard devices that are either fully charged, or contain sufficient charge for them to interact with the IFC/W-IFE systems for a sizeable portion of the flight. With many travellers now using their smartphones throughout their journey to store mobile boarding passes and to help them navigate through airports, as well as for general use, the need to re-charge on board is higher than ever. Unless PED battery life improves dramatically in coming years, in-seat power should almost always be installed alongside W-IFE and IFC. However, in-seat power comes with significant weight and cost penalties and weight and cost are, of course, two key considerations when carriers make the decision to ditch embedded systems in the first place.

Because most seats do not feature a method to keep PEDs upright and at a favourable viewing angle, passengers generally hold smartphones or tablets in their hands while resting their arms on the tray table. When watching a movie or television show for a long period of time, this can quickly result in neck and/or wrist ache. Additionally, the moment food and drink items arrive is the moment this valued arm rest takes on another purpose. Though a number of vendors have developed PED holders designed to overcome these issues, there is still plenty of room for innovation as pointed out by John Walton in this informative article on Runway Girl Network.

The recent electronics ban also highlighted the vulnerability of the W-IFE market to the ongoing fight against terrorism. Though it has now been partially lifted, any future return or extension of the ban (to smaller devices) would undoubtedly be extremely favourable to the future of seat-back systems.

For these reasons, it is hard to imagine seat-back IFE disappearing on long-range aircraft anytime soon. Rather than replacement technologies, W-IFE and IFC should be viewed as complimentary to embedded IFE. Entertainment can be amplified by connectivity, which can be viewed as a gateway to endless media and content options for everyone. Indeed, true personalisation of content and ads cannot be achieved without real-time connectivity off of the aircraft. Thus, it might be said that where there was once IFE, there will also now be IFC and where IFC existed on its own, there are opportunities too for IFE, whether wireless of wired.

Like PAL, Delta is another interesting test case. As well as providing IFC on many of its aircraft, it has also gone fleet-wide with the Gogo Vision-based “Delta Studio” W-IFE system. Whether passengers ultimately prefer to use this, the embedded system or a mixture of the two will offer insight into how the industry will develop.

Valour Consultancy is currently developing two new reports that delve more deeply into these trends. “The Future of In-Flight Entertainment – 2017” quantifies the market for four types of IFE system (embedded, wireless, overhead and portable) and provides forecasts for the growth of each. “The Future of In-Flight Entertainment Content – 2017” looks at how the demand for content is changing, particularly on routes where the flight time is shorter than the length of a typical movie.