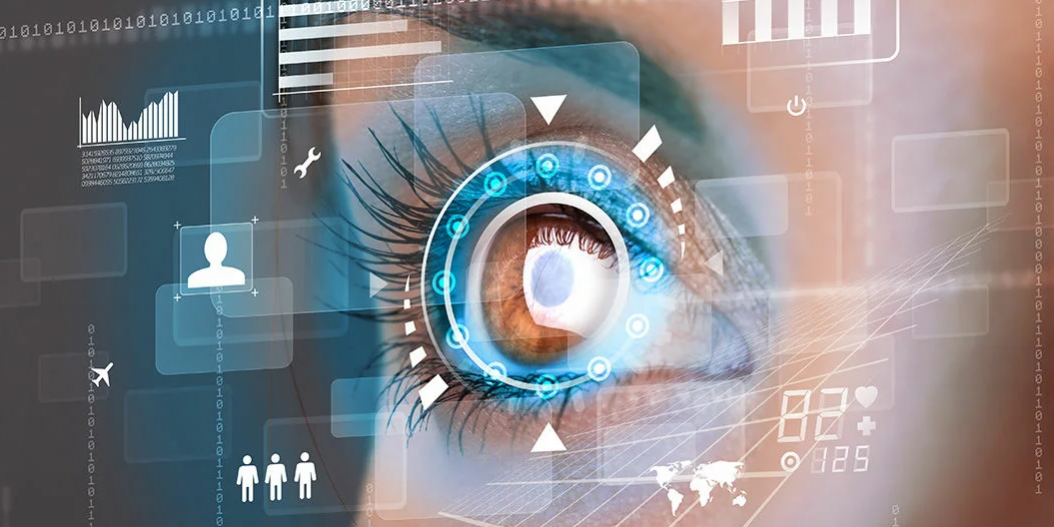 This is the second blog written using the in-depth data and analysis in our new report “The Seamless Passenger Journey is Smart Airports – 2021 Edition”. Our first blog examined the qualitative trends and factors shaping the market and how airport and airline strategies have been forced to adapt. This accompanying blog focuses on the quantitative data and forecasts resulting from our research and market analysis.

As discussed in our first blog, the market for self-service and automated passenger-facing touchpoints continued to progress in 2020, despite the disruption and uncertainty impacting the industry. The majority of new installations, upgrades and expansions to existing deployments that we recorded were either already underway or began before the full impact of Covid-19 was realised.

However, even with these projects, there was a degree of reduction in volumes. Logistical and travel issues inhibited site access for manufacturers and installation personnel. Despite some airports, such as Sydney, taking advantage of the downturn to bring forward terminal regeneration work, we generally saw a lower level of growth in the installed base of smart touchpoints than had previously been expected.

At a high level, the total number of self-service kiosks, bag drops and automated eGates in use increased by 6.8% in 2020 vs the previous year. This was aided by the fact that towards the end of last year, some airports and airlines were investing to encourage travellers back and provide safety reassurance. This included investment in self-check in kiosks with sanitisation measures and the ability to connect with mobile devices for touchless control. Movement to self-bag drop units and self-boarding eGates (as well as at other touchpoints) also helped reduce staff interactions and provide a contactless experience.

This has continued into 2021 with greater use of biometrics being seen in North America, Asia Pacific and Europe. This is aiding the transition towards seamless journeys through airports.

Expansion and Growth Across All Touchpoints 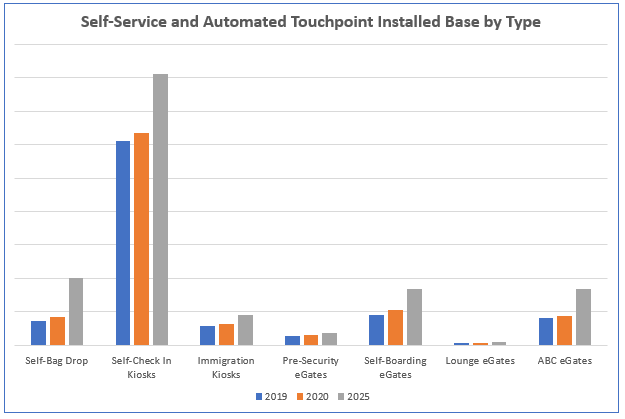 Modernisation of Airport Processes and Regulations, Enabled by Biometrics, will Boost Adoption

Some regions had been expected to start phasing out established self-service touchpoints, such as check in and immigration kiosks, as they looked to adopt different passenger-facing processes. Biometrics were ordinarily considered for alternative future approaches. The benefit of these in reducing personal interactions and better managing queues has been further enhanced in the face of Covid-19. There are no mandates on these and it will be up to individual organisations to adjust to customer expectations and preferences on an ad-hoc basis.

Other touchpoints, notably boarding eGates, continue to make progress because they facilitate streamlined processes and more efficient operational set-ups. As such, increased investment can be justified on the basis that they have a proven ROI. They are typically well-received by passengers, allowing them to board aircraft more quickly and smoothly.

We have seen that the adoption of biometrics is increasing even faster, far exceeding overall market penetration across all touchpoints as airports and airlines aim to offer touchless and seamless experiences. The use and sharing of such data does hold concerns for many companies but the benefits are clear.

That said, it will require the completion of early pilots testing processes for the processing of data across international borders before truly seamless travel is achieved. The direction of travel is clear with early initiatives by individual companies and groups, such as the Star Alliance and Air Asia, looking to lead the way. These efforts will take time to ensure compliance with various data security and privacy restrictions. Until then, usage will be restricted to individual countries with (optional) enrolment required in each.

Biometric enablement is forecast to ramp up over the next five years, averaging 140.3% growth across the market as a whole. It is already ubiquitous in some touchpoints, such as ABC eGates, and we are seeing others, such as self-boarding eGates, making good progress. Those that have had limited uptake of biometrics to date, notably self-check in and bag drop, will see even higher growth in biometric installed base, in the region of 500% between 2020 and 2025.

Part of this is due to evolving passenger perceptions. Biometrics are increasingly seen as acceptable and secure for everyday interactions. Airports and airlines are making efforts to ensure that data is protected and held for a minimum amount of time. Maintaining privacy is key to ensure this reputation is not tarnished. However, the fact that biometrics allow quick and secure processing of passengers, minimising face-to-face interactions, means that they are seen as part of providers’ toolkits to ensure safe travel.

Given the industry efforts to modernise airport processes and the advent of digital identity and seamless travel, we can only see biometric inclusion in touchpoints increasing. In addition to the rapid increase in attach rates outlined from 2020-25, we forecast that this will continue. We predict the biometric installed base of all touchpoints will almost double again between 2025 and 2030 as more airports strive to offer seamless journeys.

P.A.ID Strategies and Valour Consultancy have combined their expertise in aviation, airports, biometrics and digital identity to produce the first edition of “The Seamless Passenger Journey is Smart Airports – 2021 Edition”. This is an in-depth analysis of the market based upon over 40 one-to-one interviews with key stakeholders and extensive secondary research. Please contact authors John Devlin or Craig Foster for more information.