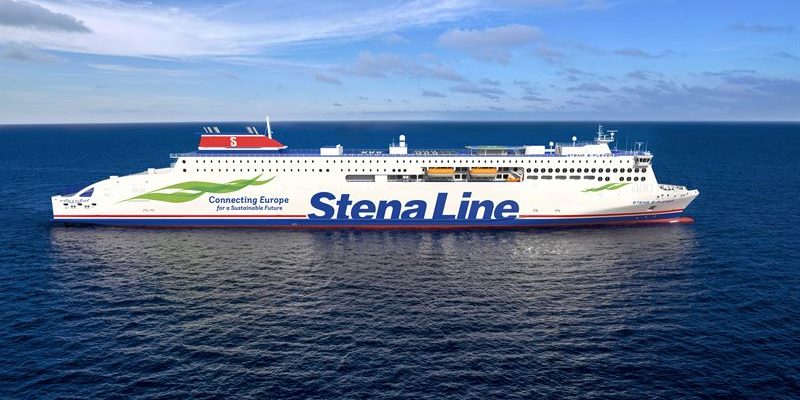 The routes are covered by a couple of operators, and I choose Stena Line for both journeys. The Swedish shipping line is of the largest ferry operators in the world. Formed in 1962, the company has services in the UK, Ireland, Germany, Denmark, Latvia, the Netherlands, France, Norway, Poland and Sweden.

Obviously, without anything better to do on my voyages, I decided to venture around the vessel, snapping pictures of the satellite antennas on the top deck and conducted some connectivity speed tests. I need to develop some new hobbies.

Upon my return home, I send an email with my musings to Stena’s customer feedback email. 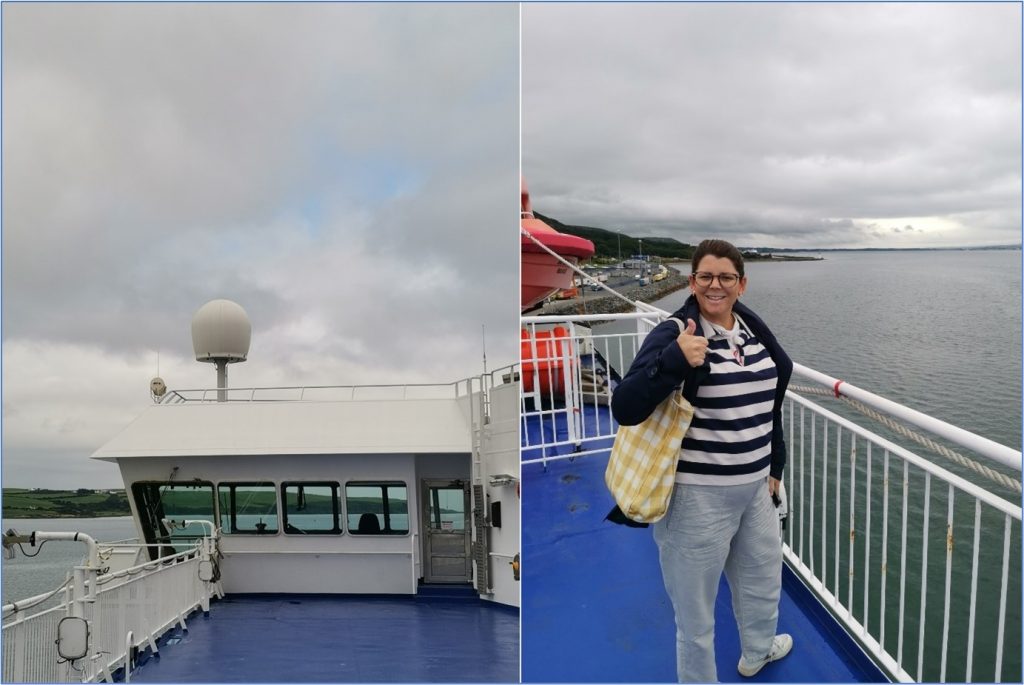 Within 24 hours of sending my email, I received an email back from a gentleman called Urban Lundberg. Urban is the service manager for vessel communications at Stena Line. Imagine a wise IT aficionado gentleman in a temple located at the top of some ancient stone steps traversing a mountain. Inside the temple, it’s packed with monitors, servers and wires. Well, maybe that’s a bit too much but it does provide the perfect reputational aura for Urban.

Urban kindly offered to talk about the evolution of the Stena AB group and what they are trying to achieve with their connectivity solution onboard the fleet of vessels to me. It’s fascinating and I hope you, the reader, enjoys it. 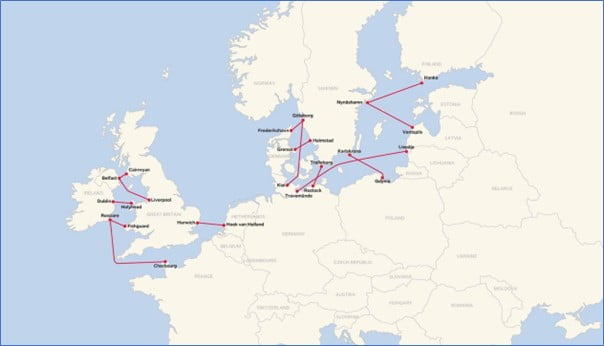 The ferry portion of the business group serves 18 routes across Europe and moved more than two million cars, vans, bicycles, lorries and people around its routes every year.

Some of the vessels can have more than a thousand passengers (Stena Adventurer – 1,500 passenger capacity) plus between 30-50 crew onboard per voyage. As such, serving the connectivity demands of passengers and crew alongside a vessel’s operational technology, bank card transactions and many other things can seem impossible at times.

Presently, the ferry operator is approximately 25% through the implementation of its SD-WAN connectivity solution. Stena Line has paused the implementation phase for the summer months, its busiest period, and will re-commence again in September 2022 with plans to complete full implementation by June 2023.

I asked Urban, which service provider he was using for the implementation and what speeds were expected per vessel. Urban politely smiled and informed me it was slightly more complex than that.

On each ferry vessel, Urban needs to cater for a plethora of services. These include:

Each of Stena Line’s vessels use L-band, VSAT, cellular and radiolink.

Marlink acts as the ferry operator’s primary service provider. However, its role of simply just providing connectivity may be a slight understatement. Breaking it down, Iridium’s Certus service acts as the ultimate back-up to all Stena vessels’ connectivity. 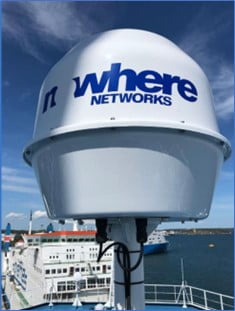 Marlink also created a closed user group (vessel connectivity pool) for Stena Line’s VSAT services which works out much more cost effective to cover all its vessels operating in Northern Europe, rather than a per vessel basic. This means that Stena Line can adjust and direct individual data channels to each of its vessels. Its newer and bigger vessels can get up to 30 Mbps of Ku-band capacity while its smaller ships could be 12 Mbps or even smaller, between 1-5 Mbps.

In addition to this, each vessel has 4G connectivity. The cohesion of ensuring each vessel and its route is also aligned with the necessary European telecom providers is one of the firm’s biggest pain points. As such, Stena must have several mobile sim cards and even more contract deals with the biggest telecom companies around Europe. Very few mobile operators will offer unlimited data. Additionally, Stena Line needs staff physically located in the country of the mobile operator to ensure they can purchase and activiate the contract.

Finally, Stena Line has a radiolink service agreement with Nowhere Networks. This company specialises in radiolink networks across Europe and essentially four motorised antennas are placed onboard each vessel (the height of the antennas is a big factor, the taller the better). One antenna is capable of transmitting and receiving 100 Mbps of data and in total, theoretically, 400 Mbps of bandwidth is possible per vessel. Interestingly, each antenna of the four is directed at a different land site. This essentially increases the redunancy of the system. The one downside of this technology is the coverage is limited and impossible further out at sea or where there are no radiolink land masts. An estimation of the maximum range of a radiolink connection is between 40 to 50 nautical miles.

The implementation of its SD-WAN solution allows Stena Line to monitor and control the connection quality on its vessels. Also, Urban and his team can adjust the bandwidth per service type, and vessel, even by connectivity type. This means they can minimise communication delays, maintain a better stability of service and also prioritise the various connected functions on the vessel.

It may not come as such a big surprise but one of the biggest risk factors for ferries, as we seem to be moving to a cashless society, is losing the ability to process payments. It’s therefore imperative to always maintain a connectivity service for bank, debit and credit card transactions. Urban informed me this service could even be pushed onto the vessel’s Iridium L-band service to ensure it always connected.

Additionally, a vessel cannot even leave port without being connected for manifest, list of passengers and cargo. These are very important data points.

Stena Line has used Marlink as its service provider for more than a decade for the bulk of its vessels. In regards to Marlink, Urban thinks the company is the largest and most reliable service provider and the companies have a long history of working together. Marlink and Stena Line have worked in a collaboration to develop its SD-WAN solution and also build their own internal network.

One of the key safeguards of their connectivity solution is none of Stena Line ferries’ critical service networks; OT, IoT, Admin networks are accessible to the external Internet and everything goes through Stena Line’s internal segmentations and firewall. This provides peace  of mind for vessel security.

LEO on the Radar

We briefly spoke about the new upcoming LEO constellations and Urban was keen to stress a few key points. In his opinion, the contellations are not quite there yet. He pays close attention to OneWeb’s solutions and the progress of SpaceX with its Starlink Maritime offering, and talked about the testing conducted by the US coast guard trying Starlink Maritime’s solution in the North Pole expedition earlier this year.

Reflecting on Stena Line’s new connectivity drive; the beauty of its SD-WAN solution enables the company to mix and match different solutions to get the most optimal and affordable breakout. As yet, this hasn’t been determined but will be over the coming months.

The high redundancy of the connectivity solutions is another essential must for the company and this is why Stena Line has so many different connectivity services. As a sidenote, Urban mentioned the Stena Line usually uses VSAT for voice over IP on its vessels.

RadioLink is a game changer in terms cost per Mbps compared to both cellular and satellite but the range is limited approximately 50 nautical miles. For example, its Rosslare to Cherbourg route has limited coverage until Nowhere Networks completes its project. But even then, when far out at sea from land, VSAT will be the primary mode for communication.

What does the future hold for maritime connectivity?
18th July 2022