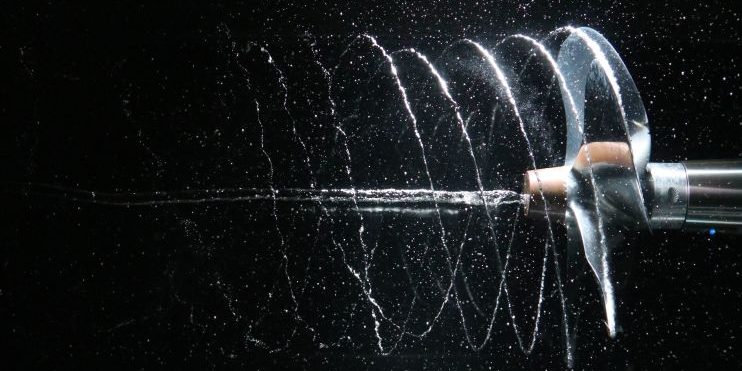 Following on from our recent article covering maritime noise pollution, it is time to address the technologies that can mitigate or eliminate this problem.

There is no point being unrealistic about this; there is little likelihood that the marine diesel and single-screw cargo ship will disappear within the foreseeable future. So, the initial section will deal with ways of quieting this system. Alternative systems such as gas turbines and electric drives will then be discussed and finally some completely different approaches will be briefly examined.

In commercial shipping, the marine diesel is a gigantic machine which depends on making little explosions in cylinders to create a lateral movement that is then converted into an axial thrust. This is not a recipe for silence.

The noise and vibration produced by the engine can be deadened at the engine with the use of dampeners, de-tuners, flexible couplings, bellows and turbocharger silencers. However, in the engine room, the use of insulation and acoustic enclosures for ancillary equipment such as pumps, compressors and centrifuges can limit noise transmitted to crewed areas but reduce structurally transmitted noise only slightly. As the deck is rarely, if ever, insulated, noise limitation through the deck-plates to the hull is virtually non-existent.

Cavitation is cited as the biggest cause of noise pollution from commercial shipping. It is caused by collapsing microscopic bubbles of air. Seawater contains small amounts of dissolved air and biologically inspired gasses (different amounts at different depths = pressure). A propeller is essentially a giant, underwater. unconstrained pump. Just before the water passes through the propeller, the pressure, which keeps the gasses dissolved, drops and the gas/air pops out as very small bubbles. As the mixture of seawater and air passes across the propeller developing thrust, the pressure increases and the bubbles pop. This is the way of the propeller. 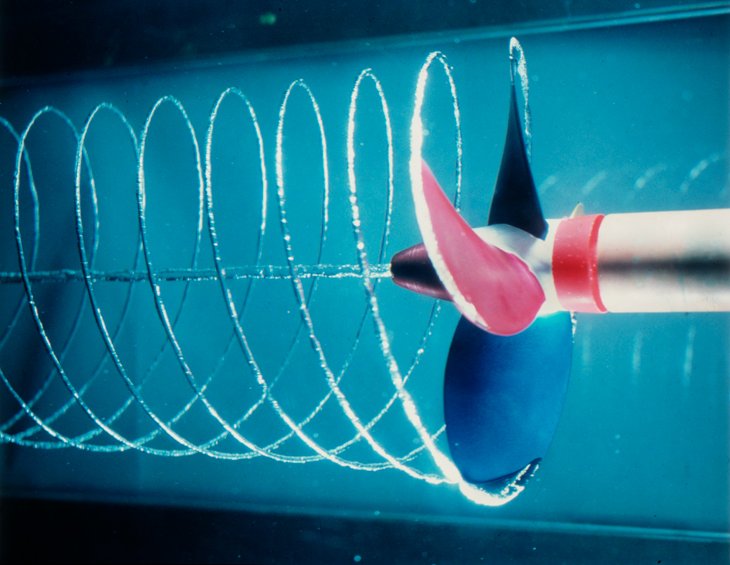 The pressure inside these tiny bubbles as they pop can be huge. Various estimates and calculations come up with figures between 7 and 2,000 bar. Popping is a noisy business. The collapsing bubbles eat into the metal of the propeller quite impressively. It is possible to move the cavitation collapse further away from the propeller, and even disperse or minimise the bubble formation, but physics won’t let it stop.

Various mitigation techniques include adding an airstream from nozzle on the hull ahead of the propeller, shrouding the propeller, pressurising the water ahead of the inlet or adding a serial smaller propeller to boost the flow away from the main propeller. One or two other techniques are available but they are polluting. At about 50 metre depth, dissolved gas is at its minimum but dropping the propeller that far down didn’t do the Titanic any good. If there is a propeller then there will always be cavitation to some degree.

The marine diesel is far from extinction but alternative power trains are being touted everywhere. Wind-assisted, nuclear, biodiesel fuel, steam turbine, diesel-electric and gas fuel or tri-fuel propulsion are all contenders. The commonality is that they all require noisy engines. The noise from turbines may be in a different spectrum but they are still far from quiet.

Oars and sails lead to silent ships (except for the guy on the drum who keeps the rowers in time), as do ships towed by kites. Hydrofoils are relatively silent once they get up but are generally similar to normal boats when manoeuvring inshore which is where quiet is most appreciated. Large hovercraft and Ekranoplans (large aircraft that fly about 10m above the surface) don’t transmit too much water-borne noise but do not have the capacity to compete with the giant vessels needed for international trade today. In addition, they would have a difficult time with oceanic waves during inclement weather when waves of 20-30m can occur. These were once called 100-year waves or rogue waves but recent research has suggested that, at any one moment, there are about 10 rolling around the world’s oceans.

Smaller vessels and military combat craft use water jets which are both quieter and speedier but do not scale up easily. Another possibility, as yet in its infancy, is the fin. Even the largest of sea creatures have yet to opt for the propeller but instead use fins and companies are currently experimenting with fin-like devices that can propel a vessel.

Shipping is not an industry that likes to spend money unnecessarily and all the add-ons and alternatives cost more money that a simple diesel- propeller combo. The way the industry advances is by a combination of regulation (usually driven by disaster and insurance cost) and by technological advances that contribute to lowering operating costs and increasing ROI. It is unlikely that the immature developments of noise mitigation will improve ROI or lower costs significantly any time soon. Pressure groups and potential litigation from fish farmers might influence legislators, class certifiers and insurance companies to push for earlier adoption of some of these measures.

Connect with Valour Consultancy on LinkedIn for our latest insight across the maritime sector. You can subscribe to our monthly email updates for recent developments in maritime connectivity and other related fields.

To request a copy of our full 2022 syndicated research portfolio, please contact our team.