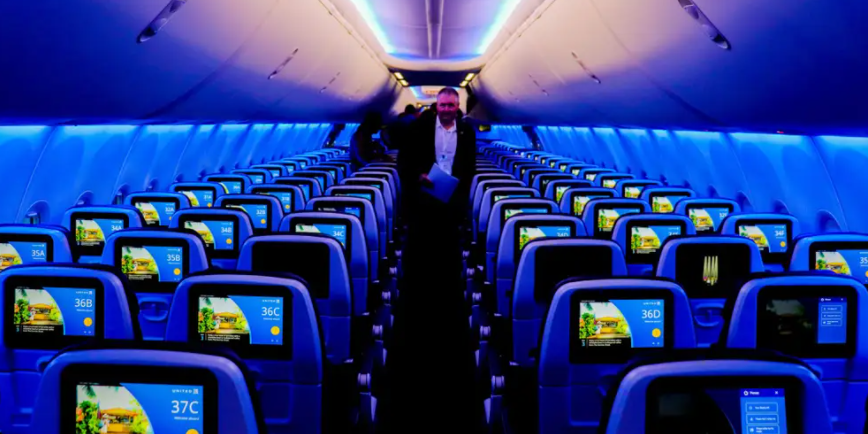 In recent blogs, we’ve made much of the fact that wireless is the only category of in-flight entertainment (IFE) to have grown during the pandemic. But what of the humble seatback screen? A delve into some of the findings from our quarterly IFE tracker service provides some insight into the way this segment has developed during this time and what’s in store for the future.

In the heady days of December 2019, when we were all much less familiar with the Greek alphabet than we are today, there were an estimated 7,648 aircraft equipped with seatback IFE. With the pandemic bringing forward the retirement of a raft of older, fuel-inefficient aircraft, the number fell to around 7,000 at the end of 2020. Another year on and the installed base has hardly budged.

The main reason for this, of course, is reduced aircraft production. Particularly in the wide-body segment, which historically accounted for the bulk of seatback installations. In 2021, we saw just 94 wide-body aircraft delivered, some 95% of which had an embedded system fitted at the factory. This is down about 30% on 2020 and way below the more typical 300-350 range witnessed in the years immediately preceding the pandemic. With wide-body production rates not expected to recover fully until the middle of the decade, vendors have turned their attention to the comparatively more resilient narrow-body segment. 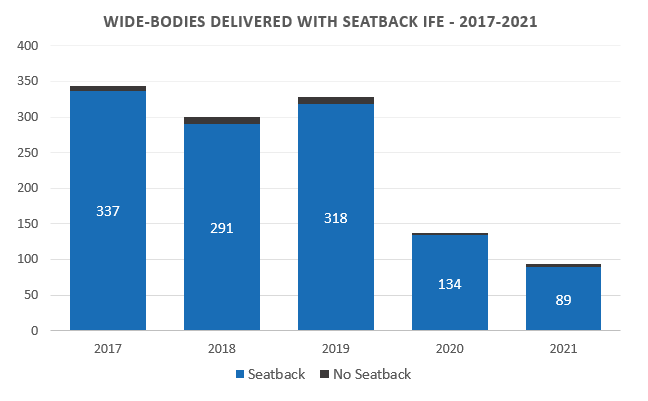 And this is particularly interesting given that seatback IFE adoption on single-aisle aircraft had been ticking down in recent years. Partly, in fact, due to the rising popularity of wireless IFE (W-IFE). So much so, that when American Airlines famously announced its new 737 MAX aircraft would not be taking embedded IFE, many took the opportunity to proclaim that the seatback display was dead. Said doom-mongers failed to take into account that penetration in single-aisle aircraft has never been anywhere near the near ubiquity seen in the twin-aisle segment and that many earlier predictions of seatback’s demise had failed to come to pass.

But seatback might just be about to undergo a little bit of a resurgence on narrow-bodies. This is definitely true of new, long-range variants, which are increasingly wide-body-esque in the kind of amenities found on board. Think lie-flat seating, an array of power options and, of course, in-seat displays. 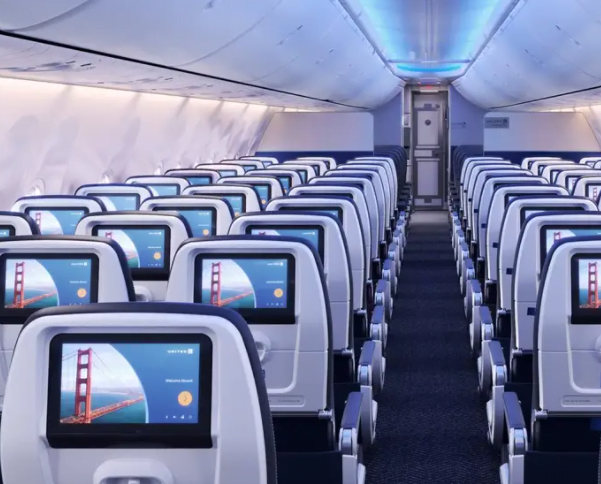 United Airlines is adding 200 aircraft to its fleet that are fitted with seat-back screens.

Our recent review of activity at the Dubai Air Show provided further evidence that the dual factors of COVID and the emergence of longer-range narrow-bodies is driving a surge in orders for aircraft such as the A321XLR, B737MAX, and the A220. Things could be looking up in more traditional shorter-range narrow-bodies too, if plans unveiled by United Airlines are anything to go by. The carrier has ordered some 200 additional narrow-body aircraft, all of which will come with a brand-new interior and seatback displays. What’s more, United’s entire in-service narrow-body fleet (save for a hundred or so that face imminent retirement) will undergo a massive retrofit programme, bringing them into line, spec-wise, with the new deliveries.

So, as we’ve said on many occasions before, seatback IFE is definitely not dead. It has survived the advent of in-flight connectivity and learnt to live alongside W-IFE, too. And if COVID, the cause of the biggest threat to aviation’s entire existence couldn’t see it off, can anything? Well, never say never, but we can certainly expect it to evolve. For one, the average cost-per-seat metric well known in the industry is now much lower than the $10,000 figure that seems to have been thrown around for the last 7 or 8 years. This is partly down to hardware becoming increasingly commoditised, serving to depress average selling prices (ASPs). But it’s also because of technological innovation that has allowed vendors to cut the size, weight and complexity of LRUs considerably.

Going forward, we can expect to see further advances from a total cost of ownership perspective. OLED displays, for instance, are currently all the rage in business aviation and may soon start making their way onto commercial aircraft. While you might ask why any passenger would notice the benefits of OLED technology on a 13-inch screen (they absolutely would), it could very well become the norm eventually. Indeed, we’re already seeing television giants like LG and Samsung announce plans to phase out the production of LCD displays. And because OLED displays can weigh 50% less than comparable LCD displays, there is huge potential in reducing an airline’s fuel bill. Some have even suggested that flexible OLED displays may lead to lower values for head impact criterion (HIC). Before getting too carried away, we should remember that flexible OLED displays are currently expensive to manufacture, while lifespan and reliability do not compare favourably to LCD at this point in time. Anyway, the message is that both CAPEX and OPEX should continue to fall, maintaining the appeal of seatback IFE for the foreseeable future.

Taking all this into account, we predict that there will be some 9,000 aircraft flying with seatback systems by the end of the decade. And by then, the market will most likely have taken on a markedly different complexion. Because of the aforementioned hardware commoditisation, incumbents and new entrants have recognised that they need to put software at the heart of future platform development. Digital services will be where differentiation occurs and to this end, we can expect to see new partnerships emerge. So, we’ll say it again, seatback IFE is not dead. It’s very much staying alive, and may very well be on the cusp of a brave new world.