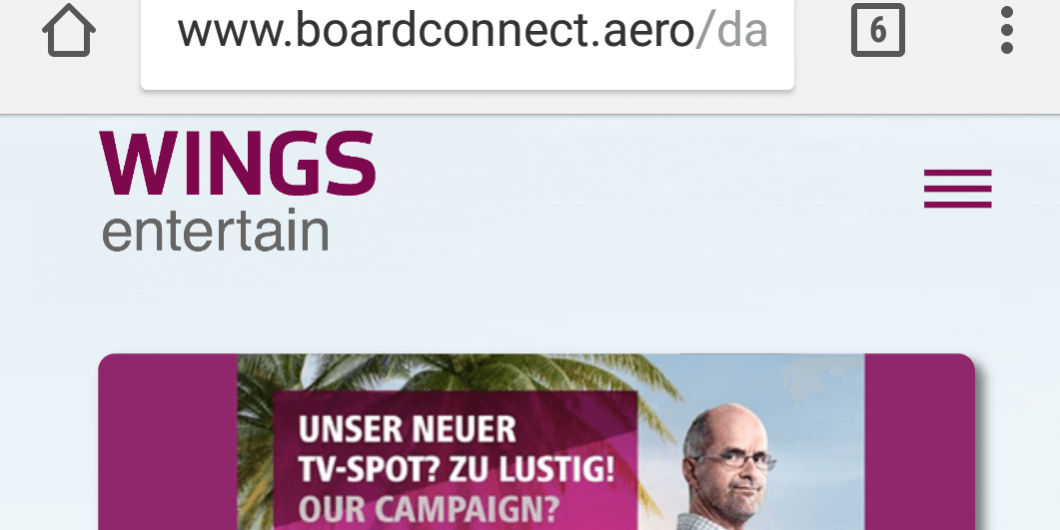 Though I’ve had the pleasure of covering the adoption of wireless in-flight entertainment (W-IFE) for some time now, it was not until recently that I had the chance to try out one of the myriad of systems now on the market. Indeed, a recent short hop to Vienna on Eurowings provided the opportunity to take its fairly new Wings Entertain platform for a spin.

The technology behind Wings Entertain is provided by Lufthansa Systems. In fact, the solution I used was based on the BoardConnect Portable product that was rolled out on more than 70 Eurowings aircraft during August 2016. These portable units – also offered by Air Dolomiti, Azul Linhas Aéreas, El Al Israel Airlines and SpiceJet – will be swapped for the fully-installed BoardConnect Classic product as aircraft are equipped with Inmarsat’s GX Aviation Ka-band connectivity system. BoardConnect Classic is already offered by Lufthansa, Virgin Australia, El Al Israel Airlines, AirCalin and Neos.

While I was already aware that Eurowings offers W-IFE, it did strike me as odd that the airline had not done a great deal to promote the availability of this service to other passengers – most of whom do not, presumably, delve deeply into this market for a living! While I did receive an email a week before travelling informing me about Wings Entertain, cabin crew did not make any mention of the service pre-flight let alone provide instructions on how to connect. Instead, an information card in the seat-back pocket provided fairly limited information.

Having downloaded the required app prior to boarding, I loaded it up after we reached cruising altitude and connected to the in-cabin network. Immediately, I was forced to watch a generic, non-skippable video advertisement. The system then loaded up in German, which was unsurprising given that Eurowings is a German carrier. However, it was not at all clear how to change the language to English and I can imagine that more technophobic passengers might have struggled with this and simply cut their losses at this point.

After orientating myself with the user interface (UI), I decided to load up the destination guides section of the system. All in all, it was pretty comprehensive with guides from PXCom included for a variety of cities in 29 countries throughout Europe and Northern Africa. Though packed with lots of interesting information on things to do, I could see no option to book a tour or receive a discount coupon for something like a restaurant booking (Update 4th July 2017: I have now been informed by Cyril Jean, CEO of PXCom, that it is possible to book tours and activities, but not for all of the destinations. Additionally, Mr. Jean explained that there are, in fact, some discount coupons available and that advertisers pay to promote their activities in this way should they so wish). With W-IFE touted by many as a perfect medium through which airlines can generate additional ancillary revenues, this was somewhat surprising. Nevertheless, it was possible to favourite things in order to create a to-do list of sorts.

Overall, I have to say that I found the experience of navigating through the destination guide content to be frustrating. As an example, touching the back button did not take me to the previous page. Rather, it sent me right back to the top menu meaning that I had to re-enter the destination guide area, and navigate back to the relevant country and city. Unbeknownst to me was the existence of another, far less prominent, back arrow that did actually link to the previous page. Additionally, some of the content was completely out of date. Travelling in April 2017, I don’t really need or want to know about Christmas markets in 2016! (Update 4th July 2017): Mr. Jean tells me that the next software update is scheduled for Q4 2017 and will see a much-improved UI. He also revealed that content is updated three times a year, which may explain why outdated information on Christmas markets was shown).

No movies were made freely available through the app. Instead, Eurowings opted to charge €3.90 for access to the “premium package” that includes movies. Again, the user interface was lacking with it being far from intuitive or obvious how to purchase said package. In the end, I figured out that you needed to play the trailer in order for an option to buy a voucher for the premium package to appear.

Volume was extremely low on one of the movies I tested and I could not hear the dialogue above the engine noise. However, this was not a problem with other movie titles (I counted 31 to choose from in total). I didn’t encounter buffering at any stage and all the streams that I tried were of good quality. All movies were available in both English and German (including subtitles).

Though I did not watch any TV series (there were seven in total), these were freely available and all had multiple episodes to choose from.

For kids, another bundle was available at a cost of €1.90. This seemed to consist mainly of game content. Indeed, no game content was freely available unless you purchased this bundle. I should mention here that our little girl watched content that we’d made available offline on Netflix and the iPlayer Kids apps on her Amazon Fire tablet. I suspect that other parents did something similar and suspect this is a growing trend airlines and providers of W-IFE systems will have to contend with.

Music/audio content was also available. However, it was necessary to register with Napster to access this content at a “promotional price” of €1 for three months. Existing Napster customers could presumably login in and explore the library available.

The moving map, which is reportedly the most visited part of any IFE system, was rather basic. In fact, I hesitate to call it a moving map. It was more of a 2D flight tracker which, in addition to position, showed the date, ground speed, and altitude. Current time, time to destination or local time was not provided. Disappointingly, there was no functionality to zoom into street level and explore the terrain below in more detail – a feature that would represent the ideal opportunity to layer in destination-related content and offers.

Opening Wings Bistro and Wings Shop, Eurowings’ branding for the in-flight menu and in-flight duty-free selection, respectively, caused the system to launch PDF menus. It was not possible to order food and drink items or other goods for sale through the system itself.

An annoying quirk of the app that I noticed is that it doesn’t work well if you want to multi-task. As a test, I switched to another app and when I returned to Wings Entertain, I noticed that it had restarted and I therefore had to endure the same non-skippable video advertisement that I previously encountered. I also had problems when trying to access the airport guides, which caused the app to lock up on multiple occasions.

Furthermore, I noticed that clicking the back button when watching a movie caused the app to minimise instead of returning me to the main menu. Strangely, there was no way to return to the home screen unless you forcibly closed the browser window that the movie plays in. Again, I can imagine this kind of thing easily confounding technophobes.

I should also mention that it was not possible to watch purchased content after the flight and there was no way to retrieve the access code you are given when purchasing a premium package should you lose it. I tried to download my voucher for safe keeping as advised in the FAQs but was presented with a message telling me that the download failed. Even so, it was possible to resume playing a movie where I’d left off after exiting the app.

On the plus side, the DRM technology used in Wings Entertain worked well and I was unable to screenshot a scene from a movie when I tried. I was also unable to listen to content without headphones so as not to disturb other passengers. The system doesn’t tell you that this is the case when you make payment though. Instead, this information is provided in the FAQs.

Having been asked on many occasions to provide my thoughts on the supposed death of embedded in-flight entertainment (IFE) systems, one thing that I have been keen to point out is that W-IFE is often installed on aircraft with no in-seat power even though the two go hand in hand. To put this into perspective, I boarded the flight with my battery level at 65%. After playing around with the system for the majority of the flight (which lasted one and a half hours), I disembarked with 27% battery. At this rate of discharge, anyone wishing to consume content via W-IFE on medium- to long-haul flights will seemingly need to board with their devices fully-charged, or have access to in-seat power.

In an effort to establish take rate, I did take a walk around the cabin to see if I could spot anyone else using the system. Unfortunately, it seemed as though I was alone in my journey through Wings Entertain! I therefore completed the survey and upon submitting, was thanked for joining the Eurowings frequent flyer program – an apt way to end my experience given the numerous UI glitches I unfortunately encountered.