Moving Map to the Future 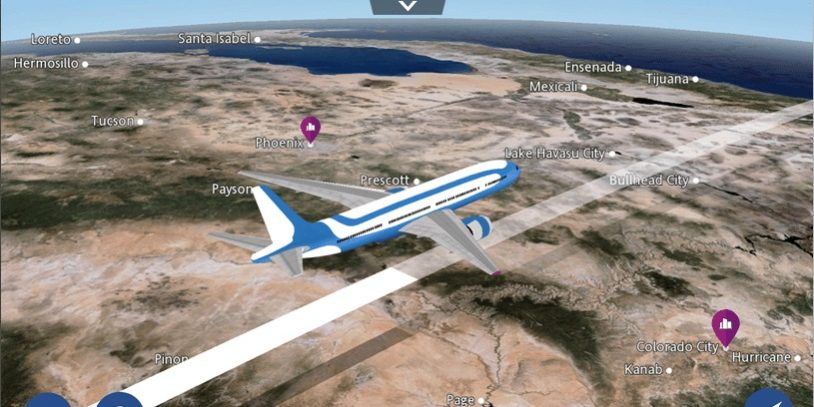 Every parent who has ever gone through the nightmare of a long journey has almost certainly been asked the immortal words, “Are we there yet?” by a bored child. Probably numerous times on the same trip too. And this can be just as annoying as the long journey itself as Homer Simpson found out when he was repeatedly asked this very question by Bart and Lisa. Even Google Maps now apparently gets irritated when you dare to enquire about the remaining journey time warning that if you ask again, “we won’t stop for ice cream”. Though nobody has the perfect answer, least of all on a flight, new interactive mapping technology (moving map) can tell you how long it will be before you land, help while away the hours and maybe even generate some revenue for the airline too.

As we all know, the traditional moving map has been a staple of the in-flight experience for some time but passengers can usually do little more than see a two-dimensional representation of the aircraft’s position, speed, altitude and time to destination. Even so, most people will find themselves accessing this service at some point during the flight for varying lengths of time. For self-admitted geography geeks like myself, this might actually be a surprisingly long time. For most others, it’ll likely be a short glance to check on the flight time remaining. However, the fact that passengers are accustomed to using location aware personal electronic devices (PEDs) and web mapping, there is plenty that can be done nowadays to improve the moving map experience in order to make it more interactive and compelling.

At this year’s APEX Expo in Portland, Oregon, I had the pleasure of speaking with Betria Interactive and got to try out the firm’s 3D moving map solution, FlightPath3D. Available to view on seat-back screens, overhead IFE systems, PEDs and even virtual reality headsets, this software gives passengers the opportunity to deviate from the flight path to zoom into the terrain in much greater detail, learn about geographical and historic information relevant to the location of an aircraft and discover points of interest (POIs) during the journey via text, images and animations. They can also choose from several interactive 3D views or use free roaming mode to investigate the world they are flying over. For younger passengers, another version makes it possible to navigate to a certain region and explore the animals that live there.

Betria Interactive is not the only company looking to benefit from an expected increased interest in this “geotainment” category of IFE content – so-called because it combines elements of geographical learning with entertainment. GeoFusion, a 3D Earth visualisation technology specialist, has worked with Thales to adapt its moving map application to work with Thales IFE systems. Like FlightPath3D, the aptly-named 3DMaps allows users to look through the eyes of the pilot with a cockpit view and browse the globe independently using touch gestures familiar to smartphone and tablet owners. Delta Air Lines, meanwhile, included a “glass bottom jet” feature in its latest “Fly Delta” iPad app. On flights over North America, passengers connected to the on board Wi-Fi can use their own device to view POIs on the ground below, as well as Wikipedia entries and uploads to geolocation-oriented photo sharing mashup, Panoramio.

It would be remiss of me not to mention Rockwell Collins’ Airshow solutions, which represent the long-time standard for moving map technology. The company is unlikely to give up its position as the leading provider of moving map technology without a fight and is believed to be actively working on enhancing Airshow so that it becomes a key part of its new PAVES wireless in-flight entertainment (W-IFE) offering. Indeed, during a recent research project focusing on the W-IFE market, we over at Valour Consultancy, found that many companies active in this space (or soon to be active) see the moving map as being integral to the success of their products. Because the moving map is invariably accessed by the majority of passengers at some point during the journey (Thompson Aerospace put the number at more than 83% during trials of its 1Net airborne local area network), it becomes a very important part of the IFE system to place banner ads.

Using analytical tools to understand interaction with W-IFE systems, and connectivity to link back to vast swathes of useful information held in back-end systems, it becomes possible to tailor these ads to an individual’s preferences. The same applies to short promotional videos and destination deals that can be subtly embedded into POIs that the passenger might be exploring during the flight. Rather than seem obtrusive or just plain uninteresting, this type of advertising and promotion has the potential to generate real revenues for the airline. Not just because the content is personalised, but because it is possible to track interaction and engagement too. To this end, Betria Interactive is planning on including lead generation and referral in existing on board payments systems so that when a passenger using its FlightPath3D product interacts with a POI or landmark on or around the flight path, an advertiser may receive this information.

By the end of this year, more than 4,000 aircraft globally will have W-IFE installed. However, service revenues from these aircraft will only generate an estimated $83 million collectively – equivalent to a fairly paltry $21,000 per connected aircraft, per year shared across multiple stakeholders. There is an argument to suggest that airlines are underestimating the unique position they find themselves in regarding the potential to generate additional ancillary revenues and this is something we certainly agree with. A known demographic with high levels of disposable income captive for several hours at a time is on its own, very attractive to advertisers. More effective advertising strategies where ads are better targeted at users and in parts of the system they visit more often and fully exploiting the ecommerce capabilities of W-IFE systems (think in-seat food and drink ordering, aforementioned destination deals etc.) will see overall will see overall service revenues exceed $4 billion by 2024. This equates to almost $250,000 per connected aircraft, per year.​