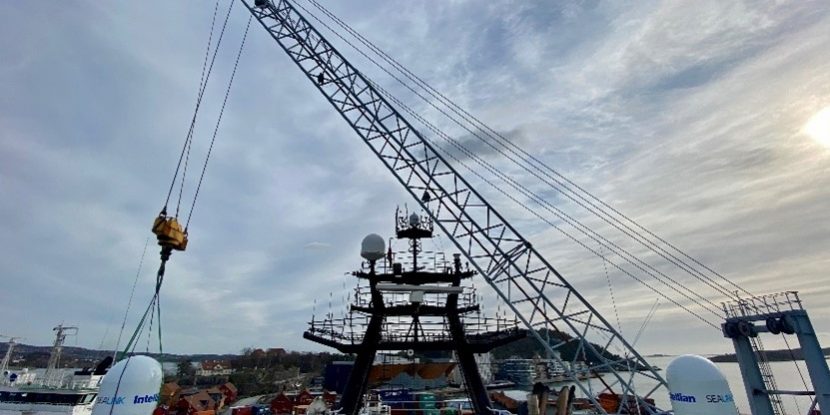 Desk-based research will only get you so far! Senior Maritime Analyst Joshua Flood reflects on a unique site visit…

Marlink kindly invited me to follow one of the firm’s engineers for a VSAT installation. I flew to Stavanger, the Norwegian equivalent to Scotland’s oil and gas mecca, Aberdeen. Leonid, a Marlink Field Installation Engineer, met me and took me to their field, logistics and testing warehouse nearby.

A little insight into Leonid’s professional life; an average field engineer will spend between 150-200 days on field trips a year, typically abroad.

Marlink has 8,000 contracted VSAT vessels, and 50,000 active MSS terminals across the globe. During key seasonal periods, many are based in the North Sea, generating high value ARPU per vessel to the firm. 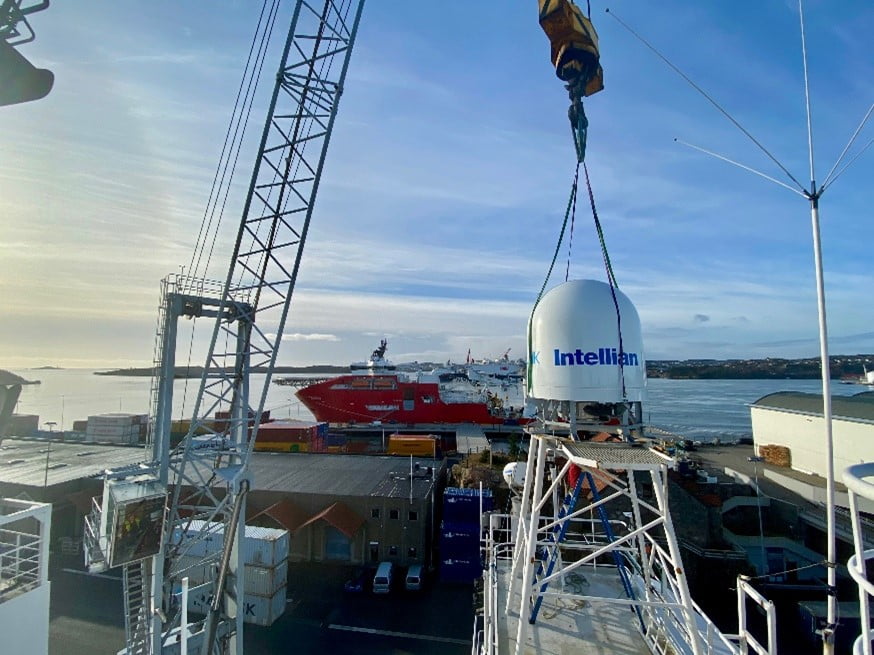 Marlink was installing its hybrid cellular and VSAT solution on Siem Stingray; built and delivered in 2014 to the Norwegian offshore energy company, Siem Offshore. Stingray was operating in the North Sea during the winter of 2020, chartered by SeaBed, and had travelled back to Kristiansand for the installation.

The Head of IT at Siem Offshore emphasised: “Siem Offshore aims to provide customers with state-of-the-art communication solutions for them to succeed with their projects. We always strive to live up to our company vision which is Caring, Committed and Competitive”

Upon entering Kristiansand Port, we completed an online safety test, before meeting the captain of the vessel, Karin, an interesting character from the Faroe Islands. His many stories and opinions are clearly received fondly by the crew. We did another vessel evacuation briefing, then it was down to the nitty gritty of the installation. 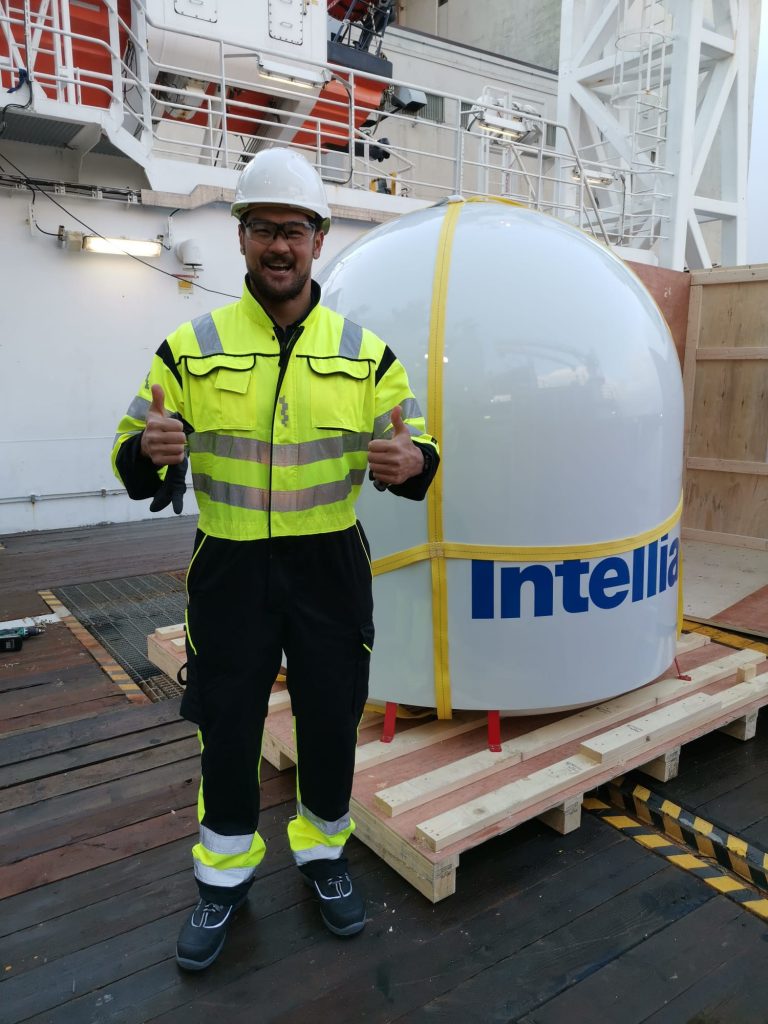 In this case, each Intellian antenna was supplied with 40-watt BUCs (Block Up Converter). A typical vessel’s VSAT transmitter is only powered to 8 or 16 watts. As such, the complexity of the installation was increased and an air conditioning system per antenna was required. The vessel previously used Global Eagle’s maritime services consisting of two Cobham’s SeaTel 97 antennas.

Tore Morten Olsen, President of Maritime at Marlink, emphasises that “to make digitalisation a reality, shipowners need a smart, hybrid network that combines signals from multiple satellites and beams with all other available and relevant connectivity carriers, optimised around their fleet’s routes and areas of operation. Only in this way can they be said to have a network optimised for maritime that provides maximised, guaranteed uptime on the primary communications channel.”

After completing an inventory check of the equipment (whose combined weight was 1,900kg) and disassembling four huge wooden crates, carrying switch boxes, routers, uninterrupted power supply units and smart boxes upstairs was much more challenging than I anticipated. Furthermore, checking the two pedestals on each side of the bridge, in the pelting rain, was not pleasant. Holidaymakers will never be visiting Norway in great numbers during the winter months.

In replacing the previous system, a crucial timesaving factor was that Intellian’s v150NX antenna had an identical bolt footprint to the previous unit. Having set up the necessary rack in the instrument room, it was on to cabling and powering the hardware. Marlink’s firmware had to download onto the iDirect X7 modem three times, for the unit’s three memory banks. We then came to configuring Sealink to the ship’s system.

Back on the main deck, the antennas were hoisted onto pedestals each side of the bridge. With much improved weather, clearance of the units from the ship structure went smoothly. The lifting operation took about half a day, mostly because the welder had to drill four holes for each antenna and bolt it on before it was safe to disconnect the crane. After that, the four remaining holes were drilled and bolted.

In the following days the welder made ladders with safety cages providing safe access to the antenna hatches underneath, as well as welding up a little pipe on the Certus pedestal since it comes with a clamp mount. Installations during the winter months can be interrupted, due to the bad weather, and engineers need to jump between tasks which in this case included commissioning one antenna and getting the system online. 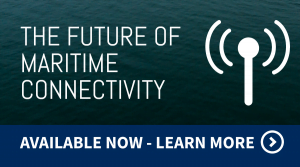 Once each antenna is attached, cabling typically takes a few hours. An experienced engineer will devote extra effort to this task, even if the cables are new, to verify everything is working well. Replacing cabling on a vessel is both time-consuming and costly once installed. In some circumstances, cables and terminations can really make or break an installation. The quality of a system can often be decided by how thoroughly an engineer terminates the cables, and how carefully they were pulled. In the case of Stingray, the cables were already installed, but had to be terminated and measured again. After this, the system needed to be configured and the antenna calibrated to connect to iDirect’s modem and get the network online.

After this, several other tests are undertaken, including a cross-polarisation isolation test and 1dB compression test. Depending on the satellite transponder, a Marlink engineer has two options for these tests. The preferred, quicker method is to use Satmotion Pocket which offers a remotely accessible spectrum analyser and software to monitor the signal. The other option is to work in conjunction with the Network Operations Centre (NOC), which measures isolation of the test signal. The capacity to reach out to an in-house teleport facility highlights the vital role Marlink’s NOC staff (located at Eik Teleport) play during installations.

Next, all network and ship phones were tested and connected to Marlink’s router. The field engineer usually works in conjunction with the vessel’s IT support team, in this case, Globetech, an IT company based in Kristiansand. Their team-leader – Tor – had a much better beard than I. You can’t win them all. 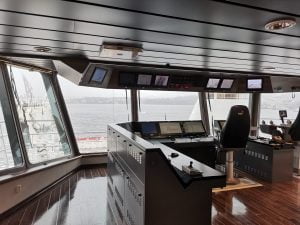 Iridium’s L-band Certus hardware, manufactured by Thales, was fitted between the two VSATs and Tampnet’s 4G solution fitted on top of the monkey island. It was essential to check all three-connectivity services work on Sealink’s SmartWeb interface and the router could switch between each service seamlessly. This process can be slow as the routers are configured in the warehouse with updates continuously conveyed to the Smart Web platform. It’s also critical that the captain can view connectivity coverage maps, and feedback (graphs) of data usage, speed, and status of each device. Leonid highlighted working with Cisco is very advantageous at points like this as its customer engineer support team is available around the clock and can assist engineers with network and configuration changes remotely.

The final day of the installation focussed on ensuring attenuation in the transmission path for both antennas was equal, to further ensure seamless switching. It is imperative that shoreside operations notes both antenna, modem, and hub systems are performing at the same level. Leonid also worked on achieving linear power output of each frequency using Intellian’s cable calibration, a new function present in the NX generation antennas. All this demanded several new 1dB compression tests. Unfortunately, these did not deliver the desired results. Intellian provided new firmware to resolve the matter, which was further verified onboard, a week later when the ship docked in Rotterdam. This shows the importance of continuous research, development, and cooperation between Marlink and Intellian.

After completing the configuration and getting all systems running through SmartWeb, the cables were labelled. Each vessel is provided with a support laptop, while photos of the installation and a report documenting the whole installation are prepared. The final point of contact is a training/handover session for the captain and electrician focussing on the system basics, how to undertake simple operations, such as manual beam switching or carrier switching, logins and user interfaces, and troubleshooting.

Captain Karin spotlighted the advantageous aspect of reliability and trust, “we got a new design Marlink system installed, presently, we have not yet been able to test its full capacity, but we are told this new system is far more advanced and reliable than previous versions. Marlink has proven to be a reliable communication provider to the offshore fleet in the past, and we have therefore kept using them as the main supplier to our fleet of client vessels.”

Marlink’sTore Morten Olsen added; “the efficiency of the network itself can be designed to reflect priority applications and support remote operations, a direction in which the industry is already moving. The same optimised network approach can be used to keep onboard IT systems up to date and compliant with regulations and charter party terms while also collecting OT data for performance analysis.”