Is there Methanol in Maersk’s Madness? 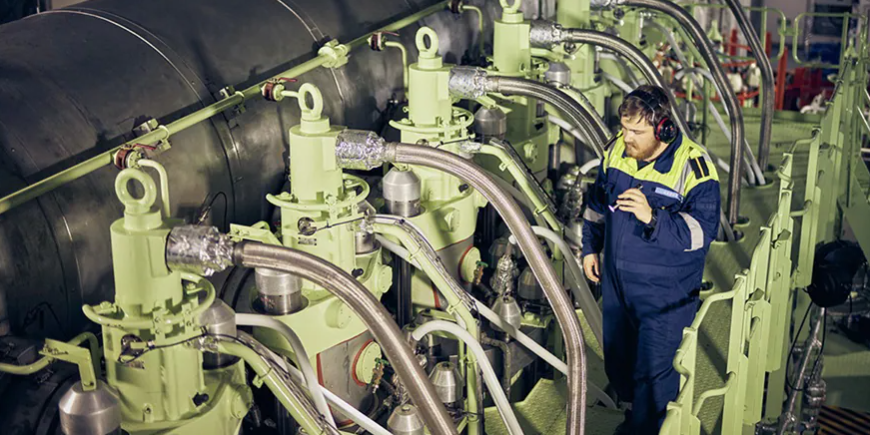 Maersk Line, responsible for 17% of the global container shipping market, has made its most significant step yet towards greater maritime fuel sustainability.

The Danish company has ordered eight vessels – each with a nominal capacity of approximately 16,000 containers – that can run on green bio-methanol, industrial methanol (extracted from natural gas) or low-sulphur heavy fuel oil (HFO). The vessels will be manufactured by South Korea’s Hyundai Heavy Industries. The ships’ dual-fuel engines will feature a methanol propulsion configuration developed in collaboration with manufacturers including MAN ES, Hyundai (Himsen) and Alfa Laval. This is a significant scale-up of the technology previously restricted to smaller engines in vessels of around 2,000 TEU. The vessels will be classed by the American Bureau of Shipping and sail under Danish flags.

A Different Philosophy of Logistics

Methanol is less energy dense than HFO so the engines need a considerable amount of extra control and engineered control systems. The ships, themselves, will need bunkering and storage solutions suitable for both fuels – methanol is very hygroscopic so must be protected from atmospheric or seawater contamination. This will make the ships 10% to 15% more expensive, each costing about $175 million. It is necessary to develop a carbon-neutral fleet by 2030, as demanded by stockholders, consumers and, increasingly, by regulation.

Of course, what these companies are actually promising is to stop doing climate harm by these dates. Whereas, a more sensible option would be to start being carbon positive by removing carbon dioxide from the atmosphere. This is incredibly difficult and out of kilter with current business practices, meaning it is not a practical option over the short term. It would be more useful over the next decade but requires a strategic approach that does not reply on mitigation but on change of mindset to a different philosophy of logistics.

HFO is made from Mazut or Mazout, a Russian word which means a viscous liquid residue from the distillation of crude petroleum. When mixed with more refined oils to bring down the viscosity, it is used chiefly as fuel oil in waste oil burners, cement factories, power stations in Russia and the Middle East and as marine fuel. Marine HFO exhausts sulphur oxides, nitrogen oxides and particulate matter which cause acid rain and damaging smogs when burnt. Even Low-sulphur HFO is still allowed to emit 0.50% m/m (mass by mass) of sulphur – 0.10% in designated areas.

Methanol burns much more cleanly. Methanol combustion emissions produce little or no sulphur/nitrogen oxides. However, carbon monoxide is much the same, carbon dioxide is slightly higher and some aldehydes and ketones (formaldehyde and acetaldehyde) are emitted, many of which are both carcinogenic and toxic to living tissue. Man B&W marine engines probably avoid this by design. This can also produce an acidic mixture thus precluding the use of aluminium in engines and lowering the pH of any exhaust cooling water of scrubber discharge. So saying, the use of methanol is far superior to HFO of any blend.

Maersk will operate the vessels on carbon neutral methanol or sustainable bio-methanol as soon as possible. Most methanol currently is produced on industrial scale from synthesis gas. “Syngas” is a combination of varying amounts of H2, CO, and CO2 frequently derived from gasified coal or natural gas.

Sourcing an adequate amount of carbon neutral methanol from day one in service will be challenging, as it requires a significant production ramp up of proper carbon neutral methanol production, for which Maersk continues to engage in partnerships and collaborations. It has recently invested in California-based WasteFuel, a start-up focused on turning waste into sustainable aviation fuel, green bio-methanol, and renewable natural gas. This investment was made through Maersk Growth, the corporate venture arm of A.P. Moller.

The agreement with HHI includes an option for 4 additional vessels in 2025. The series will replace older vessels, generating annual CO2 emissions savings of around 1 million tonnes for the company. Unlike some ship owner-operators, Maersk would appear to have a policy of retaining older ships so the whole marine industry benefits with this move. As an industry first, the vessels will offer Maersk customers a carbon neutral transport at scale on the high seas.

Despite one or two areas to address, methanol is an ideal maritime fuel and replacement for HFO. Future engines built for methanol are expected to be more efficient. However methanol needs a pilot fuel/ignition system and can benefit from Exhaust Gas Recirculation (EGR). EGR recirculates exhaust gas back into the intake so there more non-combustible gases in the engine cylinder. This reduces the peak in-cylinder combustion temperature. Many existing engines can be modified and much equipment needed by HFO can be removed such as oil heaters, oil separators, selective catalytic reduction (SCR) and other scrubbers. Piping has to be ungraded to double-walled, but, by-and-large, the bunkering, terminals and fuel logistics and distribution remain the same.

If we compare methanol to other fuels touted as HFO replacements, disregarding bio-diesels as insufficiently reducing noxious emissions, then we look at LNG, hydrogen, ammonia, fuel cells, batteries, solar and wind. All of these require a new engine and, in reality, a new ship. The logistics of supply and storage also require some considerable modification.

Much of the existing fleets have more than a decade of useful working life and these are the vessels that are emitting the problematic gases. So the solution must be an alternative that can be used today and tomorrow. Methanol is probably the only alternative that fits that bill. New builds can be designed and built for whichever fuel option is specified.

HFO – Down But Not Out

Strangely all this greening of the maritime industry does not mean that HFO will go away. It will still be used in Russia, the Middle East and parts of Asia. Refineries will still produce HFO as a by-product. They then have the problem of disposing of the waste. Mazut can be put through a secondary distillation process although expensive investment is required so the problem is not all it’s cracked up to be. Current best practice advice for refinery waste talks about solidification, stabilisation and encapsulation then landfill, incineration (bad plan) or deep well injection or equivalent (old coal mines perhaps).

The greening of the maritime industry implies shifting the problem elsewhere for future generations to deal with. This is not as bad as it may seem as the refining process already deals, professionally, with a host of noxious by-products as a result of desalting, removal of mercury, sulphur, and other dissolved metals and contaminants.

Maersk’s approach to net-zero carbon would seem to be both appropriate and sensible although, with a fleet of 708 vessels, the programme for retrofit and replacement would seem to be an arduous one. However, one of Maersk’s fortes is logistics and strategy so, if any company can do it, Maersk can.

While all efforts should be commended and appreciated, it would be foolish to stop with this sticking-plaster solution. It is in all maritime users’ interest to ameliorate climate change with is concomitant bouts of extremely inclement weather. It is unlikely that Classification Societies or Regulatory Authorities will want to create a different industry so it is up to the likes of market megacorps such as Maersk (337th most valuable company in the world) to grasp the bull by the horns and lead the planet away from its current path to catastrophe.

To keep up with our latest analysis of the maritime sector, subscribe to our newsletter and connect with our team on LinkedIn.