Intellian formally unveiled its Rotterdam European HQ with an opening party on 12 May 2022, and kindly invited Valour’s senior maritime consultant Joshua Flood to join the event.

Having opened the doors in 2021, after a €6.5 million investment and team of 30+ people already in the office, the “official” opening party followed the pattern of many global events with by being delayed until 2022. Intellian has made incredible progress in the maritime hardware market, surpassing Cobham Satcom as the Olympic torchbearer for VSAT hardware. Initially in unit shipment volumes back in 2017, but now also in commercial revenues.

How they have accomplished this is a journey that would span several thousand words. For interested readers, it will be covered in detail within the upcoming 2022 edition of our popular report on The Future of Maritime Connectivity.

Being more concise for the purposes of this blog; its leadership team has remained consistent, and they work very well with all the service providers, chiefly the leading players. This has encompassed being agile with customer requirements, meeting high product demand during difficult periods of supply by making bold gambles in procurement, and helping service providers showcase reliability and system checks on their antenna systems to shipping customers. 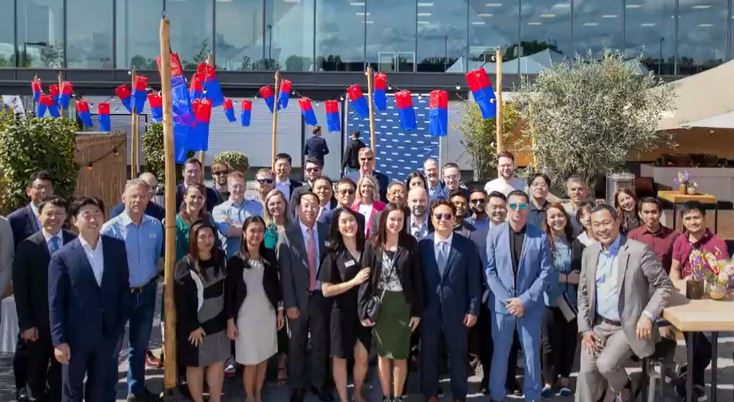 A full video showcasing the event can be found on Intellian’s LinkedIn page.

In addition to the Rotterdam facility, the company has opened a new research and development centre in Pyeongtaek, South Korea, and also opened a new office in Uxbridge (west of London near to Heathrow) in the last 18 months.

Reflecting on his visit, Flood commented: “To offer Valour’s perspective, I think the large warehousing facility will prove very useful for service providers’ customers operating in Northern Europe, and similarly for Asian shipping companies waiting to transit back on their return trips.

My favourite part of the event was the South Korean ritual for opening the facility and the comments from Mr Eric Sung, founder of Intellian, about the company’s relationship with Rotterdam. He explained how a bureaucrat representing the city chased him (I want to use the word “badgered” but I doubt Mr Sung actually said that) for two years, which led to Intellian renting its first office workspace there and eventually building a large facility next to the airport. Persistence pays off.“