How Much Does a Business Jet Operator Pay for Onboard Connectivity? 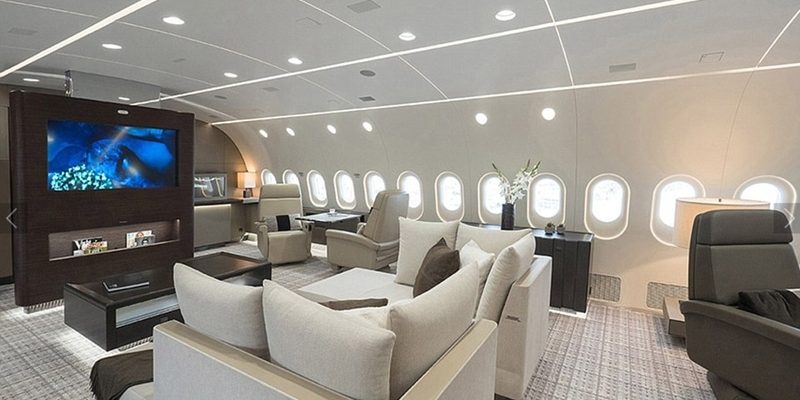 How much does a business jet operator pay for onboard connectivity? It’s a simple enough question but unfortunately, there is not a correspondingly simple answer. However, having recently spent almost a year putting together our report on the adoption of in-flight connectivity (IFC) in business aviation, we certainly feel qualified to shed some light on the subject.

How much does a business jet operator pay for onboard connectivity?

Across the entire fleet of connected business aircraft, average revenue per aircraft (ARPA) is estimated to stand at just over $3,600 per month.

But it is important to remember that this takes into account the full gamut of aircraft types – from the flying palaces more affectionately known as bizliners, to owner-operated single engine turboprops and everything in-between.

As a general rule of thumb, the larger the aircraft, the more passengers on board and the higher the willingness to pay for connectivity. The greater too the likelihood of there being multiple connectivity systems installed, at least one of which will be a high-bandwidth solution with a hefty service fee attached.

Aircraft size and region of operation play an important role in system selection (and thus, have an impact on how much an owner or operator pays for their connectivity). Air-to-ground (ATG), for example, is a great option for aircraft small and large but it is only applicable to aircraft based in North America, which is home to competing networks from Gogo and SmartSky Networks. And due to a lack of space on the tail or fuselage to accommodate today’s bulky gimballed Ku- and Ka-band antennas, anything smaller than a super midsize jet based outside of the region must make do with narrowband L-band connectivity.

ATG, L-band, Ku-band and Ka-band services can be procured from an ever-increasing number of vendors, replete with a wide variety of service plans generally differentiated by data allowance, speed and the frequency with which the bill needs to be paid (monthly is common, but more flexible “power by the hour” options are growing in popularity). And these plans are always evolving. A couple of months ago, Inmarsat announced that, as part of its Jet ConneX (JX) Evolution programme, a number of existing service plans would be upgraded. At the same time, the firm launched JX Edge, the first in a series of new high-end service plans.

Looking at ARPA by technology type makes for interesting reading. In Q3 2022, what Gogo alternatively refers to as “Average Monthly Revenue per ATG aircraft online”, or ARPU, was $3,376. In the Ka-band realm, each JX-equipped aircraft was estimated to have net Inmarsat just under $5,000 per month back in 2019, before COVID-19 wreaked havoc on the industry. It should be noted, though, that this is not what JX customers actually pay. Instead, Inmarsat’s distribution partners resell the solution, at a marked-up price, and then bundle in a bunch of other value-added services. To put this into context, end-user pricing for JX is estimated to range from $10,000 per aircraft per month at the bottom end of the spectrum, to just over $60,000 per aircraft, per month for the (previously) top tier JX-Pro package. 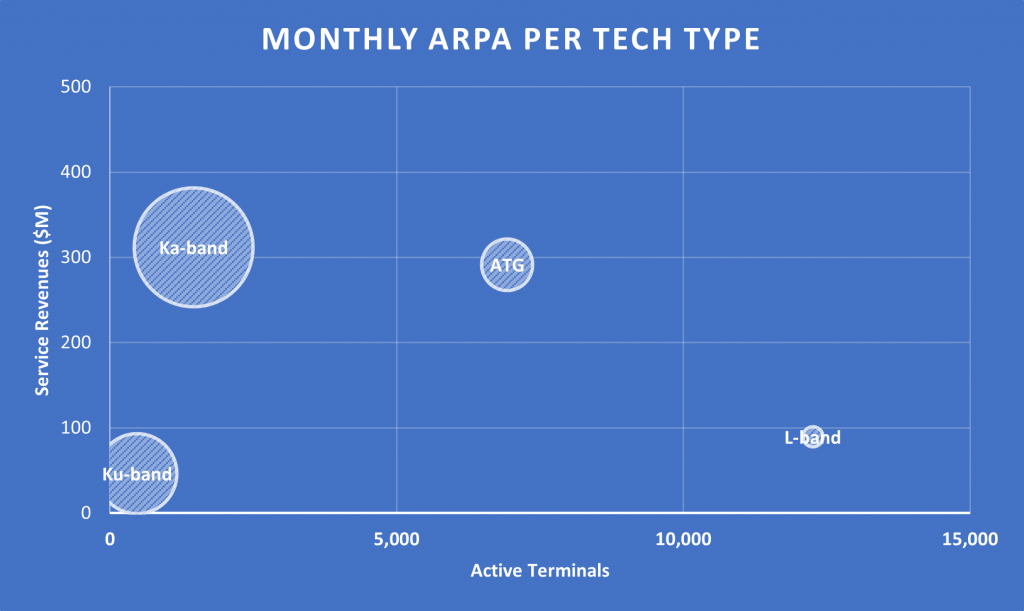 It is a little more difficult to gauge ARPA for L-band and Ku-band connectivity. For the former, there is a big difference in what the average customer pays for Iridium and Inmarsat services, but the overall blended average is estimated to be around $600 per month. This is heavily weighted towards Iridium, however, with active Iridium terminals outnumbering SwiftBroadband (SBB) terminals by a factor of almost 3:1. For the latter, which is where newer solutions like LuxStream and FlexExec come into play, it is believed to be somewhere in the region of $8,000 per aircraft, per month.

In the “heavy jet” market, which includes bizliners and large cabin jets, ARPA is just under $7,000 per month. But users can often pay much, much more than this. One corporate flight department that we interviewed during the course of our research remarked that its budget for connectivity is in the range of $20,000 per aircraft, per month. Said company operates three Gulfstream G550 aircraft that travel globally and mentioned that some months it will exceed this amount and some months it will undershoot it. Our understanding is that certain corporate flight departments might have a per aircraft, per month budget as high as $90,000.

In the “medium jet” segment, which includes super midsize and midsize jets, ARPA is estimated at around $1,500 per month. Unlike heavy jets, only a small percentage of these aircraft use Ku- or Ka-band connectivity systems, which, as alluded to earlier when discussing JX pricing, tend to be accompanied by more expensive service plans at the top end of the spectrum. Instead, ATG and L-band dominate here and together, conspire to pull the overall average down quite considerably.

Again, ATG and L-band are currently the only games in town when it comes to connectivity options for small cabin jets, very light jets and turboprops, which for the purposes of this blog, are bundled together in one singular category. Monthly ARPA for this category comes in at around $900 a month. Interestingly, both Gogo and SmartSky Networks are actively targeting very light jets and turboprops with the AVANCE L3 and LiTE solutions, respectively. The fact that both networks can support connectivity below 10,000 feet is a key factor with few turboprops spending significant periods of time above this altitude. Another is cost. Price sensitivity is arguably highest in this segment with our analysis revealing that over 40% of the in-service turboprop fleet is more than 25 years old.

NGSO to Change the Paradigm?

NGSO satellites promise to expand the total addressable market for high-bandwidth connectivity on smaller airframes that do not operate within reach of an ATG network and that cannot accommodate the mechanically steered Ku- and Ka-band antennas commonplace today. They also promise to dramatically lower latency and allow service providers to layer capacity in multiple orbits such that their aviation customers are always able to access reliable, high-speed satellite connectivity, anywhere in the world.

Of the LEO solutions from Telesat, OneWeb and SpaceX that we expect to hit the business aviation market over the course of the next few years, we only really know about pricing from the latter. Access to Starlink Aviation will reportedly cost between $12,500 and $25,000 per month – figures that suggests a certain Mr. Musk is initially targeting bizliners and large cabin jets. And understandably so, given how lucrative these segments are.

We believe that for LEO solutions to be accepted in the mid- to light jet segment (where an aircraft’s purchase price might range from $5 to $10 million), it is likely that subscription packages will need to be in the region of $2,000 per month. They might even need to be lower to win business on the smallest of jets and on turboprops. From a hardware standpoint, ATG solutions aimed at turboprops generally cost less than $50,000 – a third of the cost of a Starlink Aviation “aero terminal”.

It is very difficult to accurately model connectivity services revenues across the different business aviation segments and in different geographies. Nevertheless, we’ve had a jolly good try in our recently released report entitled “The Market for IFEC and CMS on VVIP and Business Aircraft”. In it, we predict that monthly ARPA will continue to tick upward thanks in the main to a combination of increased flight hours for connected aircraft, a greater number of connected aircraft being flown, as well as growing data consumption on board. By 2031, ARPA across all segments of the market is projected to sit at around $7,000 per month – a factor that will account for about 20% of the $1.6 billion increase in total annual service revenues that we expect to see between 2021 and 2031.