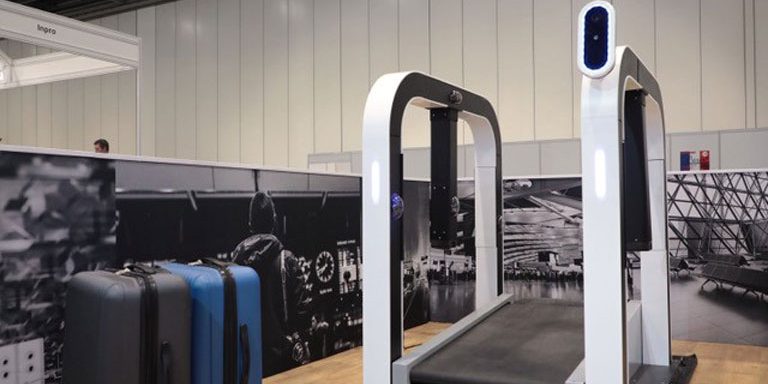 The “R number” is just one of numerous pandemic-related terms which have regrettably become part of our everyday vocabulary. Measuring it is not always straightforward, but it has rarely brought good news for the aviation industry. While airports are still enduring the worst crisis in their history, the growing adoption of self-service and automation technology has continued during COVID-19. In fact, the pandemic has in many cases been a catalyst rather than a deterrent. In this blog, we review the business case for the “smart airport” and discuss how airline and airport requirements have changed over the course of the last two years.

A new type of R number

In our recently published report on “The Seamless Passenger Journey in Smart Airports”, we estimate that revenue associated with the sale of self-bag drop units, kiosks (for check-in and immigration) as well as eGates used in various passenger touchpoints, hit $236 million in 2021. This was just over 1% higher than in 2020. The significant expenditure seen gives us a new type of R number to consider – return on investment (ROI). How exactly do we quantify the success of these new technologies? And how can vendors convince cash-strapped airlines and airports to continue to invest in spite of turbulent market conditions?

Calculating the ROI from smart airport technology is no mean feat, as many of the benefits are difficult to measure. Further, there are significant differences in the cost of touchpoint hardware and for a full, “seamless” journey, there is likely to be a requirement to deploy and bear the costs of one or more biometric identity management platforms.

Intangible benefits include an improved passenger experience which, itself, is derived from several factors. Chief amongst them, a passenger’s ability to travel through an airport without being caught up in too many lengthy and frustrating queues. And one day, perhaps even entirely document free. But this faster throughput has a tangible benefit too. Increased customer satisfaction means that the chances of a passenger returning to use the airport in future are that much higher. Indeed, many travellers report feeling anxious about running late and each process that has a queue infers a possible deadline impact. Similarly, passengers that can more rapidly pass through the various checkpoints have more dwell time in retail or restaurant spaces. This, alongside a probable rise in willingness to spend, increases the attractiveness of that airport to potential retail lessees.

Pre-pandemic, the primary driver for smart airport technology was undoubtedly the need to squeeze an ever-increasing number of passengers through physically constrained infrastructure. When traveller numbers fell through the floor, focus switched to how self-service and automation technology could be used to provide reassurance that the airport environment is safe and secure. To this end, we saw the birth of a number of touchless control mechanisms for touchpoint hardware. However, the pandemic has really lit a fire under the move towards seamless journeys – a concept where a passenger can traverse all touchpoints – end-to-end – using their face as the token that unlocks passage at every stage. Stakeholders are therefore looking to biometrics and digital identity to help them get through what will be a bumpy and unpredictable recovery period. 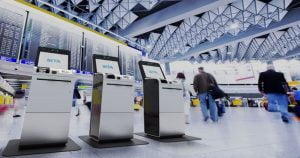 The fact that biometric inclusion in passenger touchpoints makes for an inherently touchless experience aside, there are several additional reasons driving the considerable attraction in its use. For one, airports have sadly had to part ways with vast numbers of staff during the pandemic. The need to compensate for a consequential loss of expertise places more urgency on the requirement for modernisation of existing processes.

Also, there is clear pent-up demand and passenger numbers won’t stay at historic lows forever. For this reason, many players have used the period with lower passenger numbers as an opportunity to try and solve future problems with new approaches. Melbourne Airport, for example, has been able to complete 64 construction projects since March 2020 thanks to its relative emptiness during COVID-19. The projects have added new infrastructure and amenities to the airport to support the passenger experience while also improving sustainability.

When those numbers do return, there are several ways in which we can tangibly measure the extent to which the adoption of smart airport technology will help realise operational efficiencies. Self-boarding eGates are a great example and it is estimated that their use can help reduce queuing time by anywhere between 30% and 250%. Even if that results in a minor improvement in turnaround time of just one minute, the savings quickly stack up. In calculations detailed in our report, we estimated that if applied to a fleet of 300 aircraft, each of which flies an average of five cycles per day, then total savings across a year would be just under $14 million. This is a conservative estimate which could be much higher particularly for those operating larger aircraft, where far greater turn time improvements are possible.

Whilst a knock-on effect could be to reduce the need for personnel, savvy airports and airlines have realised the benefit of being able to redeploy staff to provide a greater level of customer care to those who need it the most. That is, the elderly, families with young children and people with disabilities. Again, this increases the likelihood of such passengers becoming repeat customers. 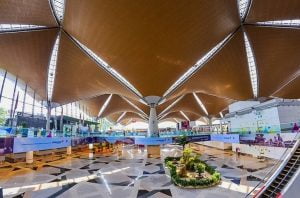 Self-bag drop is another touchpoint where throughput can be considerably improved. Indeed, SITA remarked that the installation of units at Kuala Lumpur International Airport had reduced processing time by half, averaging 30-40 seconds compared to 75 seconds for each passenger manually checking their luggage. An additional benefit was that it reduced the average wait to check in by 40%. The required number of staff was also reduced, with six agents typically needed to assist passengers checking their own luggage compared to an average of 15 previously. This not only delivers potential personnel cost savings, but also offers much greater operational flexibility.

Self-bag drop helps airlines tap into new ancillary revenue streams too. The manual check-in process leaves overweight excess baggage at the discretion of the check-in agent. But by automating the weighing stage with a self-service machine – even if the passenger then proceeds to a human agent – airlines can add a payment stage to the process, which the passenger must complete before they can proceed to the next step in the airport. Adding this level of intelligence and/or automation allows new services and dynamic pricing to be introduced (as it is for seats, varying upon the level of demand and capacity), where baggage pricing can change depending upon size, weight, demand, etc.

With touchpoint hardware becoming rapidly commoditised, the introduction of new services like this will be key to solving the ROI equation in future. And as margins continue to be squeezed, the market will be forced to transition away from the more traditional CAPEX-based approaches of days gone by and towards new, more flexible OPEX-oriented models. The main benefit of the latter being that airports and airlines are not completely crushed when passenger numbers plummet during unforeseen events.

To this end, Elenium has launched its new VYGR (short for Voyager) COVID recovery programme to eliminate the financial risk of deploying automation and self-service technology during uncertain times with a consumption-based model, paying only on a per-use basis. This approach is scalable to smaller, regional airports, offering the same capabilities and benefits as it would to major hubs. 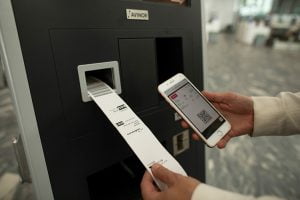 The case for cloud-based solutions

A shift away from use of the CAPEX model brings further to the fore the concept of the cloud to reduce up-front investment needed for the build out of new projects, as well as ongoing costs (local infrastructure, of course, requires regular maintenance). By using the cloud, IT costs vary in line with passenger volumes rather than being fixed costs. Further, and perhaps more pertinent given current events, the cloud allows airports to quickly redeploy assets, helping them contain costs by consolidating passenger handling within a smaller operational footprint such as a single terminal. What’s more, adding new IT capabilities traditionally requires a lengthy certification cycle that sees updates released on a quarterly basis. With the cloud, those constraints are removed so updates to the passenger experience can be delivered regularly, and new applications easily accessed over an internet connection.

Cloud solutions also promise to help create new revenue opportunities. The likes of Amadeus Flow and SITA Flex, for example, can be used to roll out contactless multi-merchant payments quickly and easily at check-in desks, kiosks and bag drop units, while at the same time, empowering clients to create new cloud-native apps that provide the best experience for their customers. 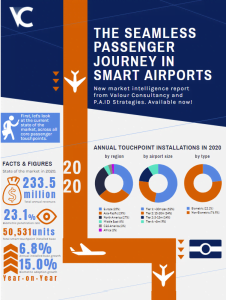 Clearly, there are occasions where it can still be more profitable to fully maintain a manual process. This will often be in smaller airports where there is a significant LCC presence. Passengers flying with LCCs being less likely, of course, to check baggage in the hold, obviating the need for self-bag drop. And of course, different regions have different labour costs, which can make adoption of automation less compelling. The average monthly wage of a border official in Africa, for example, is much lower than in Europe, meaning the traditional one person, one desk approach will often be more cost-effective than having an agent oversee multiple eGates.

Even so, the benefits of self-service and automation in airports are evident and increasingly well understood amidst the backdrop of the pandemic. As such, we can expect total annual revenues from the sale of touchpoint hardware to reach $386 million in 2025 – an increase of 65% on 2020.

We have published a free infographic summarising the findings from our recent report on seamless passenger journeys. The infographic details a number of performance and operational benefits as well as the rate and size of change in the market for automation, biometrics and other smart airport technologies. Take a look here.

How Are Aviation and Border Control Getting Ready for a Digital Future?
5th May 2022