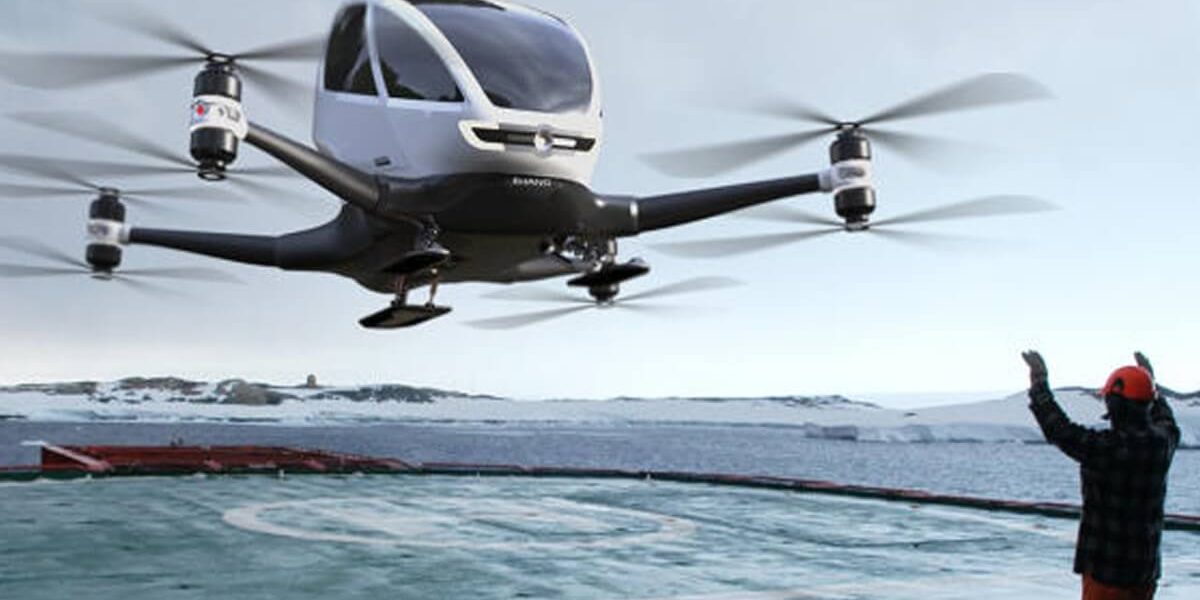 The majority of drone marketing reports have been quite remiss in devoting little space to the discussion of the development of drone taxis. Indeed, the 2016 Valour Consultancy report only mentions the Ehang 184 in the section devoted to that company and only mentions the Urban Aeronautics AirMule in passing but in April 2017 the company made its debut test flight of the Cormorant.

Yet in mid-2017, we find that Dubai is planning to introduce the Ehang as a city-wide taxi service in July this summer and Las Vegas will trial them later in the year if it is cleared by the FAA after testing in Nevada. Still, there is some research ongoing as predictive algorithms are required to compensate for the greater inertia that a loaded aerial taxi possesses. In addition, it has taken slightly longer than anticipated to set up the command and control centre. Although the vehicle is completely autonomous, every parameter of the craft and its flight is monitored and checked by a team of operators in a specially-built centre. This gives passengers the reassurance that there is a human to talk to should the need arise.

Before we get carried away with the potential shown by driverless cars and drone taxis, we need to look at the market they are entering. The mechanical transportation market has developed over two centuries with incremental safety features arrived required, generally after some horrific incident.

Rail, buses, taxies and trucking are established industries that have more pull with the legislators, employ more people and are more heavily unionised than the technologically innovative transport such as drone taxis, driverless trucks and driverless taxis. There are even plans for unmanned ocean freight vessels. Yet in some parts of the world, the most obvious candidate for automation, the train, has yet to move to unmanned operation. There are nearly 80 Grade 4 (totally unmanned) metro systems in the world. These are all purpose-built and for such innovation to become feasible on traditional trainlines, there would need to be considerable investment which would be outside the capabilities of any commercial train operator.

Why is this relevant or pertinent to drone taxis? For free-flying service around a city, the number of safeguards would again require an almost inhibitive investment. The reliability and safety of this service has to be unparalleled. Remember that the airline Qantas has not had an accident related fatality since 1951. Drone taxi services must be better than this to win the public trust.

For this reason, perhaps the initial trial service might be over a fixed route where uncontrolled landing would not cause additional problems. It has been suggested that a taxi service for business travellers from a city centre to the city airport might be appropriate. This makes some sense since the taxi payload is limited to less than 100kg.

Once FAA approval is obtained, tourist flights over the Grand Canyon would be a great publicity boost especially if the body was made of a clear material. It would definitely compete favourably with the Skywalk.

Tactical Robotics which is a subsidiary of Urban Aeronautics has had the Air Mule unmanned supply and rescue ‘Fancraft’ on its development drawing board for a decade. It is not known if the Israeli Defence Force has yet had a chance to test it in a conflict situation. This vehicle has a significant payload of 500kg and a range of 50 km making it an ideal solution for disaster recovery scenarios. Of course, the main target audience is the military who have budgets enough to underwrite its development.

Another innovative possibility has been unveiled in March this year at the Geneva Motor Show by a collaborative venture between Airbus and Italdesign. This is called the “Pop.Up” and the concept is essentially a passenger pod that can hold two folk. This pod can either be latched to a self-steering four-wheeled ‘ground module’ or an eight-fan ‘air module’. Needless to say, this is all controlled via a Smartphone App. You plan your route on your phone and the App offers the most convenient combination of ground and air travel. Given the stated objective of freeing commuters for city congestion, the purpose of the ‘ground module’ seems a little vague. However, if they are going multimodal, it would not take a great stretch of the imagination to have to passenger pod mountable on to train bogie also thus providing door-to-door service for dormitory town residents.

Valour Consultancy does not believe this niche market has immediate potential for growth but can envisage a time in the not too distant future when unmanned Ubertaxis and autonomous Überpassengerdrones may be the main form of city transport.