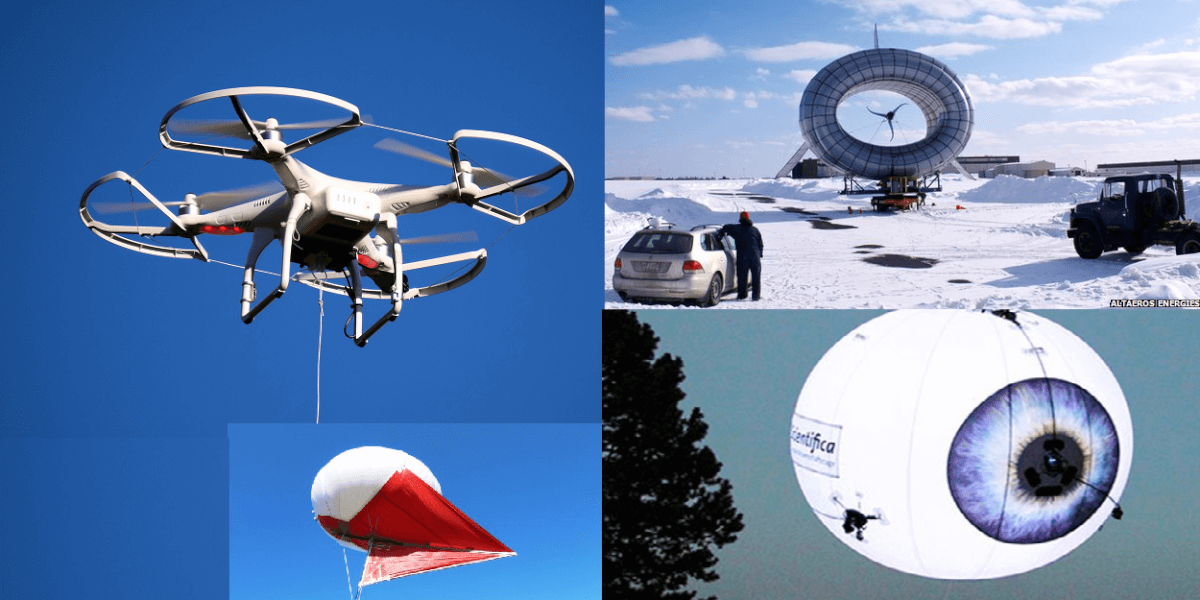 In VC’s Commercial and UAV report, the section detailing Technical Requirements (chapter 2), discussed in some detail the alternative of tethered drones. Recent articles in the media have shown that this niche market is developing apace.

Tethered UAVs on building sites for use with surveillance cameras make good economic sense. The basic problem with dirigibles is that payload capacity is limited. One cubic metre of Helium in a balloon can only lift roughly 1 kg which must include its own frame weight and the weight of its tether so to put a camera at 150m (say) probably requires an inflatable of 20m3. It might be possible to tether one to the top of a tower crane and reduce the size if the site has a tower crane. Helium is also a very leaky gas so top-ups are a necessary evil.

One interesting use of tethered dirigibles is as repeater relays for relaying commands to a fixed wing UAV flying over a large cattle station or ranch. Six tethered dirigibles at 150m on the horizon with repeater relays for command signals would allow the survey UAV to patrol an area several times the area of greater London which is quite useful for larger cattle stations in Australia which exceed this area by several times and even some of the ranches in Canada and the USA which almost approach this area.

The commercial world is cottoning on to the techniques that have already been used by military forces all over the world. Raven Aerostar has been making aerostats for military applications for several decades. They offer technological solutions for Integrated Situational Awareness (ISA) which is essentially a tethered blimp with a camera, radar and communication package.

AT&T have now tested a flying cell tower (delightfully called ‘The Flying COW’ – Cell On Wings) that can provide 4G coverage for 100 Km, essentially the area of Paris, France or Bronx County in New York City. It is tethered to a vehicle-based ground station which continuously powers the device and, using a fibre cable, sends and receives data. AT&T see the uses for this in Disaster Monitoring and Recovery and temporary set-ups such as music festivals.

EE says it is deploy a fleet of Allsop “helikite” drones over the next three years to extend wireless coverage in rural areas and when its 4G network goes down or needs more capacity. These are presently used by the military for surveillance and communication enhancement. Of particular benefit is their all-weather capability, the aerodynamic profile allowing overflight to continue in rain, snow and wind. EE expects to launch its first drone this year to coincide with a music festival such as Glastonbury that draws tens of thousands of fans to a remote location overloading the local network. Additionally, these Helikites have been used by ships in remote locations such as the Arctic and have been deployed for land and infrastructure surveys.

Another interesting potential for Helikites is in agriculture. Drone surveys for precision agriculture and forestry tend to be a single flight survey at a particular time of the day using Infra-red cameras, LiDAR and ordinary photometry. This provides an invaluable snapshot to indicate plants in distress and allow planning for remedial action. A permanent survey vehicle, such as a Helikite, would allow crop monitoring over 24 hours or longer which allows the agricultural engineer to pinpoint many more areas for crop yield improvement.

Last month, Bronx Fire Department, the largest fire department in the United States, deployed a tethered drone for blaze assessment on a building in Bronx County.

On 6th of March 2017, a building in Bronx County caught ablaze. The conflagration needed four units to tackle it and it posed significant dangers to firefighters. Normally the firefighting team would survey the fire from adjacent high-rises to optimise their team deployment. On this occasion the department used a Hoverfly Technologies drone to take high-resolution colour and thermal infrared footage that gave them a clear understanding of the fire spread so allowing for safe access. Hoverfly use Yuneec drones and a lightweight tether to power the drone and transmit and receive data.

Tethered drones can give prolonged surveying capability. During Catastrophe Remediation and in emergency situations, persistent surveillance allows the rescuing service to effectively strategise their deployment so saving lives and property. The ground power allows more heavy duty lift motors than would be possible with battery power which gives greater payload but that payload includes the weight of the tether so the Hoverfly combination is limited to 150m height. In addition, the tether limits manoeuvrability.

Two other suppliers of tethered drones are Powerline and Cyphyworks. Both use the DJI Inspire drone and address the same market as Hoverfly.