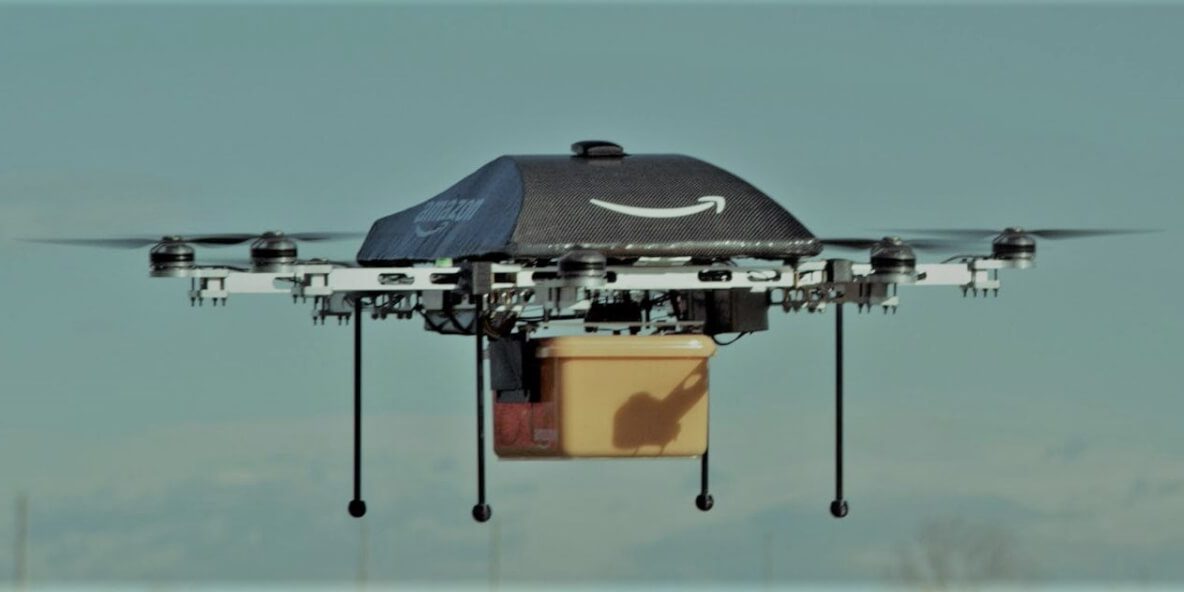 Sometimes when we watch an action movie, we see our heroes struggling along a mountainside and suddenly one or two little pebbles roll down in front of them. It’s a cinematic shortcut to let us know that a landslide is coming. The pebbles have started falling down the mountain of potential that is UAV delivery.

The first signs of the impending avalanche were vital supplies of medicine and blood in hard-to-reach villages in Africa and Honduras. Postal Services in Switzerland and Singapore quickly saw the potential for streamlining their operations with drone deliveries and then came socks in the Silicon Valley, Peri-Peri Chicken and a Chicken and Cranberry pizza in Whangaparaoa (that’s in New Zealand), slurpees in Reno, burritos in Blacksburg and lately, a bag of popcorn and a Fire TV control in Cambridge (in UK) – from order to delivery took 13 minutes.

In logistics, the last mile – the delivery from the final distribution centre to the point of use or sale – has always been troublesome as it consumes costly man-hours and clogs up traffic networks with polluting vehicles. As a rule of thumb, this last leg of the delivery costs 28% of the total cost of delivery. The burgeoning on-line retail sector in the UK has roughly doubled since 2010 when it stood at 10% of total retail sales. In the US, the figure is expected to be about 14% of retail sales will be made on-line and all of these will be delivered.

Delivery is low paid work in hazardous conditions and has hitherto been accomplished in the main by ‘self-employed’ contractors to a delivery service. Long gone are the days of the young lad on his bicycle delivering the shopping around the village. Recent actions by these delivery contractors for guaranteed wages, holidays and other worker’s rights lead the industry to believe that cheap delivery by humans will soon become non-viable.

Why is drone delivery likely to become the next ‘big thing’? Simply put, because it is doing precisely what automation was intended to do, replacing humans doing an unpleasant and low-paid job. At the moment the USA is lagging behind other countries that are allowing, nay encouraging, drone delivery services. Considering the potential time-saving, cost-saving and pollution reduction, it won’t be long before the FAA has to address a growing clamour to facilitate this industry.

The potential value of business in this sector in the US and Europe could easily be in the tens of billions of dollars. It has been difficult to find definitive figures but in 2015, it was reported a statistic research vendor that pizza delivery alone accounted for $9.7 billion; it is assumed that this figure includes the cost of the pizza and the box it rode in on. It doesn’t really matter, as the potential for drone delivery dwarfs all other services that drones might perform.

Of course, all the deliveries that have been done so far have been undertaken by drones in line-of-sight of the operator and in good daylight conditions. Replacing a relatively low-cost boy-on-a-bike with a slightly more expensive drone pilot does not make economic sense. If the industry is to flourish, then more trials need to be undertaken with operators remote from the delivery point, at dusk or later in the evening and possibly with the drone (or multiple drones) in autonomous mode. And once those trials have been successfully accomplished, then regulators need to adjust their position to accommodate this blossoming service industry.